For a few years our members have been thinking about the hackerspace having its own utility PCB ruler. Now the time has come and we have to thank to PCBWay for their support, since they kindly offered to make some of our PCB rulers!  Get your own ruler here! 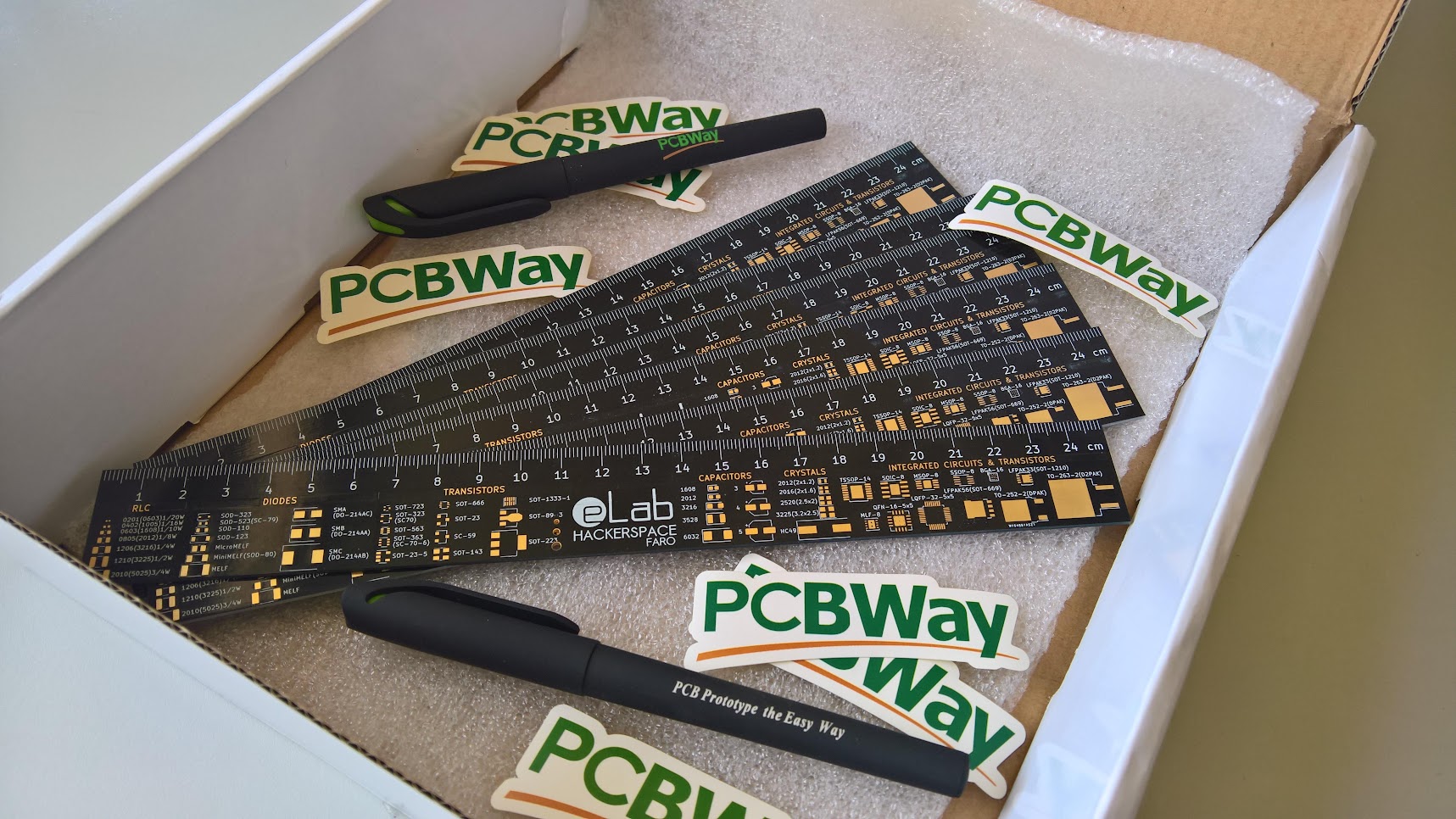 I started by analyzing all the different PCB rulers that I could find, to get some inspiration and improve upon them. There are quite a lot of PCB rulers out there, so I’m just gonna resume some of them with my honest opinion.

Probably the most famous one is the Adafruit – Mouser – Digikey cooperation ruler, since it’s open source, it’s quite easy to find it anywhere with different logos and brands. Although I’m not particularly a fan of it because it’s quite poor in terms of an electronics cheat rule, it’s mostly just a bunch of footprints with nothing particularly useful on it. I personally think a ruler should have footprints but also some useful info that would serve as a quick cheat table for when you’re designing a PCB or doing electronics in general. There are other rulers with this issue like the one from Nvidia for example.

Then there is the complete opposite, rulers with so much information that they get boring and a bit ugly. Some examples of this are the ones from Digikey and EEVBlog, they are definitely very useful, but don’t care much for aesthetics.

There are obviously some rulers out there which are nicely balanced between footprints and useful tables, like Simon Chaudeurge’s and Jan Böhmer’s rulers. Although personally I think they’re still lacking some appeal.

Finally there are also some with beautiful designs, like these amazing rulers with black magic RF components like antennas and filters by Makis Katsouris. Another design I love is the one from Kitspace, which has some amazing background patterns. Although they both miss useful data tables for electronics design.

That said, I thought about designing a ruler well balanced, while still trying to achieve a beautiful clean look. But I guess that could be a very personal take on things, since everyone has its own different tastes and opinions.

First I opened up KiCad and draw a 3 x 25 cm rectangle. I added the ruler marks in the silkscreen layer, metric system on the front face, imperial on the back. One detailed I noticed on most rulers I’ve seen, is that the zero is never placed on the edge of the PCB, so I wanted to do this, because it can be quite useful, when you just push the ruler against an object, you’ll get the exact measurement.

To keep it balanced, I decided to add the footprints on the front face, and the useful electronics cheat rule tables on the back. Regarding the footprints, I opted mostly for SMD to avoid interfering with whatever I was going to add on the back side. The footprints were organized by type: RLC, Diodes, Transistors, Capacitors, Crystals, ICs and other power packages. I used the default KiCad footprints for most components and also tried to title each one with their names and alternative references to be as clear as possible.

All of the footprints were lined up as tidy as possible and our Hackerspace logo added in the center. Each section title is also shown above in the copper layer. Since eLab’s colors are black and white, I decided to use black soldermask with white silkscreen. To give it some “bling”, we thought gold on black would look nice, so the Enig surface finish was chosen. Here’s a print from the front of the 3D model by Kicad.

Now for the electronic and PCB cheat ruler things get a bit tricky. There are a lot of useful information that could be added but the space is limited. One thing I wanted to have on it for sure was the trace and via size vs amperage correlation. It’s a very useful cheat to have nearby when designing PCBs, specially when you have higher current applications, like motor drivers and such. I don’t mention it on the ruler itself, but all the current information is established for a copper thickness of 1 oz.

1 oz corresponds to 0.35 μm and by the way, a units conversion table is also available on the ruler, which shows some of the most common unit conversions used in PCB design, such as mil to mm, in to mm, oz to g, among others. Another tables included on the ruler, that are also useful while designing PCBs are a clearance distance between traces, according to the voltage and depending on the traces being uncoated (unc) or coated (coa); line width and text sizes for the silkscreen layer, which can be useful to check if the text is easily readable or not; and finally and layers/text indicator, which shows the different combination between layers on the PCB.

In terms of electronics design there are also some useful information such as typical BJT and MOSFET transistor diagram applications, SMD resistors, polarized capacitors and ceramic capacitors coding calculations, and finally LED typical forward voltages according to the LED color.  And here is the print of the back face of the ruler from KiCad’s 3d model:

Now let’s move on to the real deal. As I mentioned before, PCBWay offered us a service for use to make a few PCB rulers, and here is the final result. First I uploaded a zip file with the gerbers to their online quote form, they now have a new online gerber viewer which is very useful to check for errors and preview how the PCB will look. After that, they took care of the rest, the PCBs arrived relatively fast, I had them in less than a week via DHL, which is surprising for these kind of Chinese services. So here’s what I got after ripping off the DHL packaging: 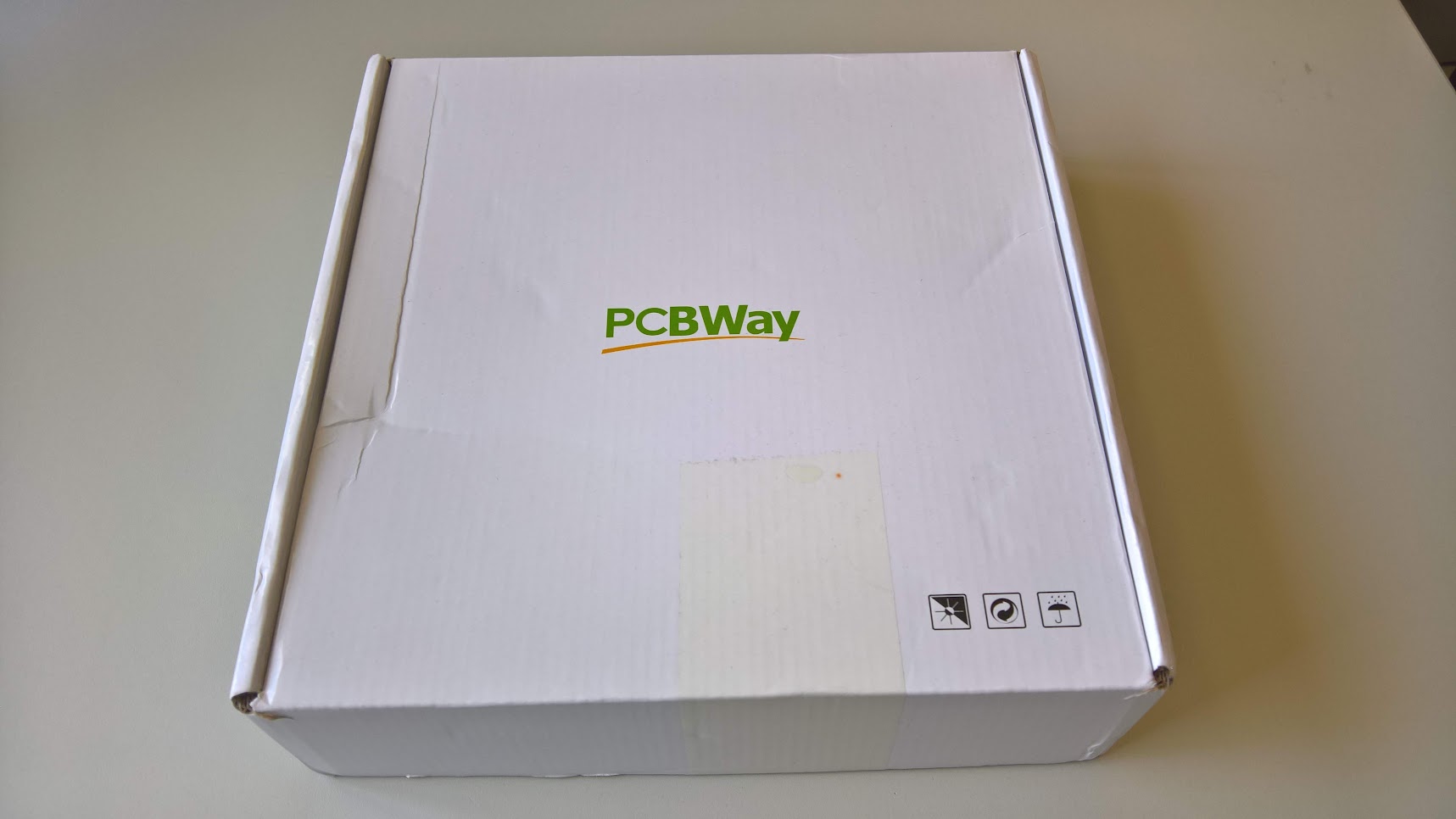 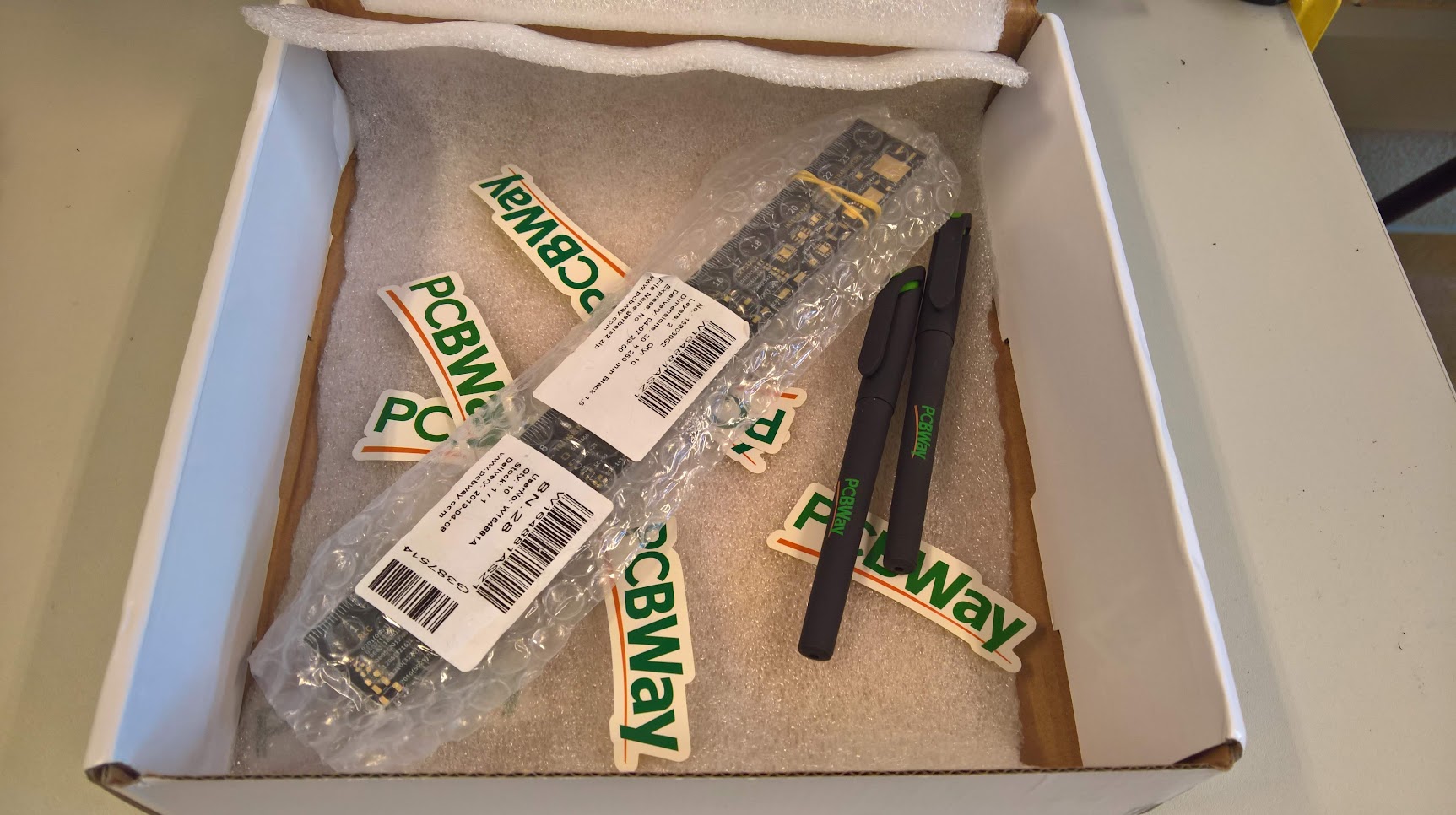 The PCB rulers in the middle, nicely wrapped, together with a few stickers and pens, which are always welcome 😉 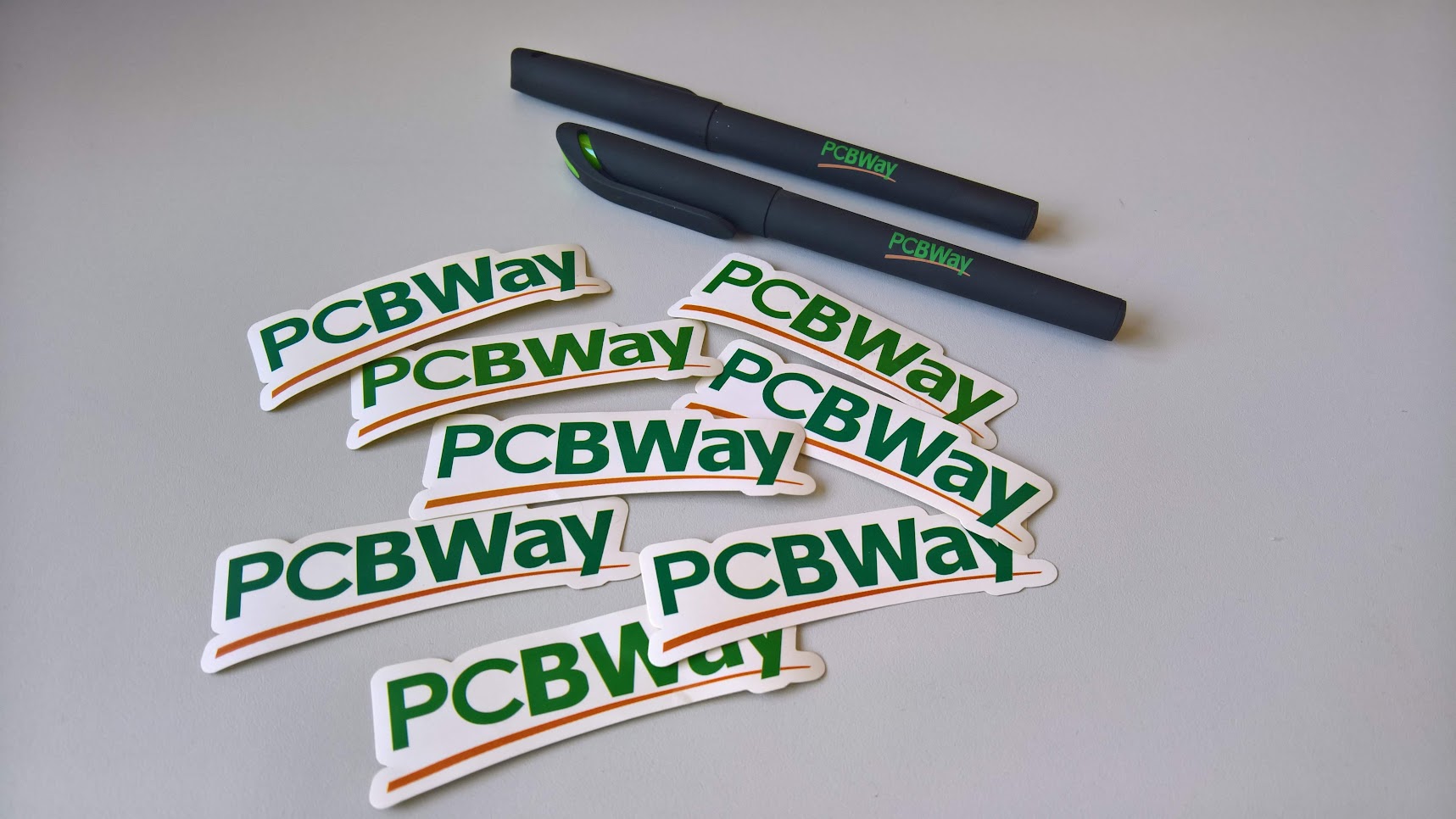 But now for the important part, the PCBs. I was positively surprised by how they look. They are absolutely stunning and really professional, they seem really high quality: 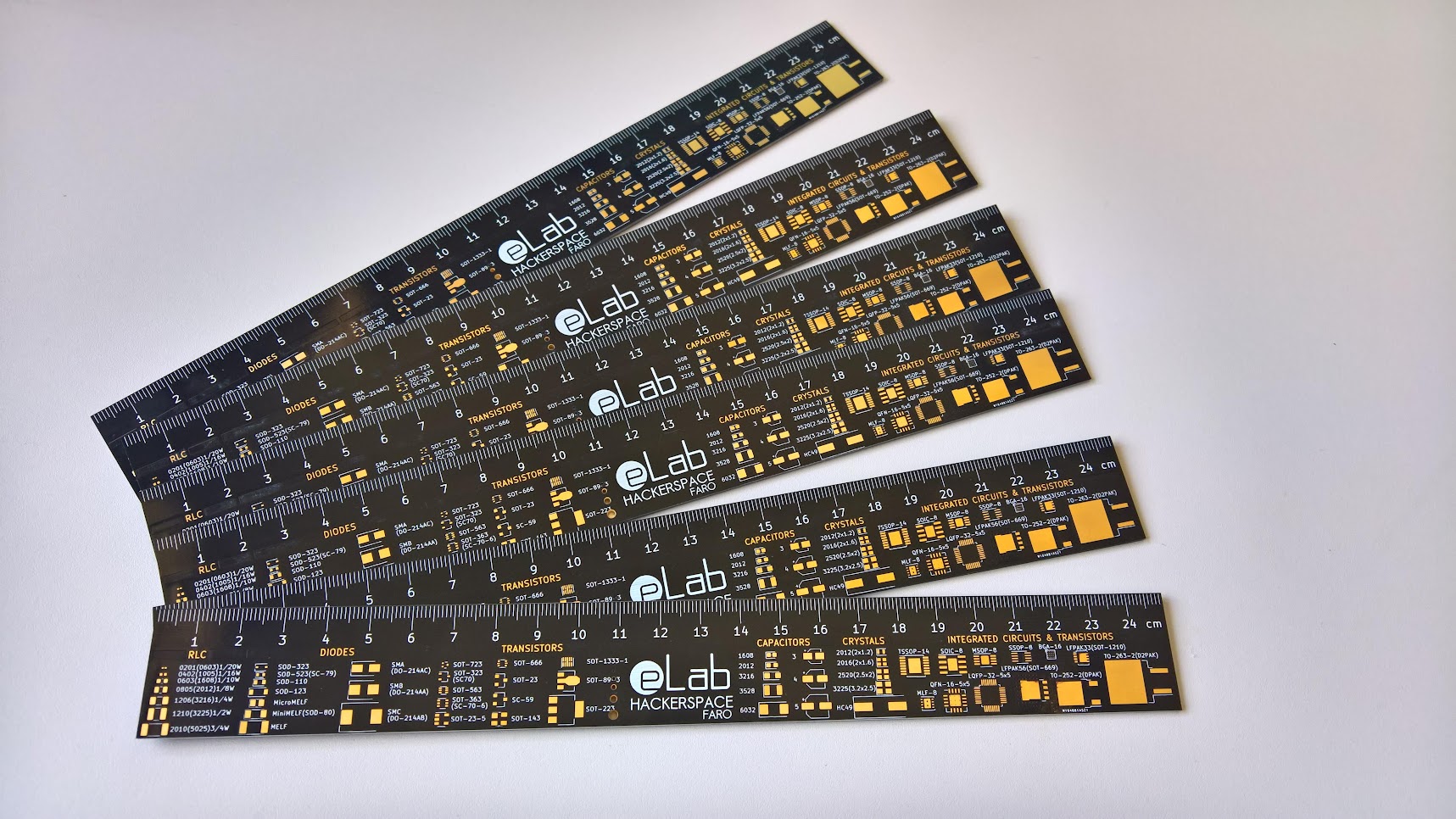 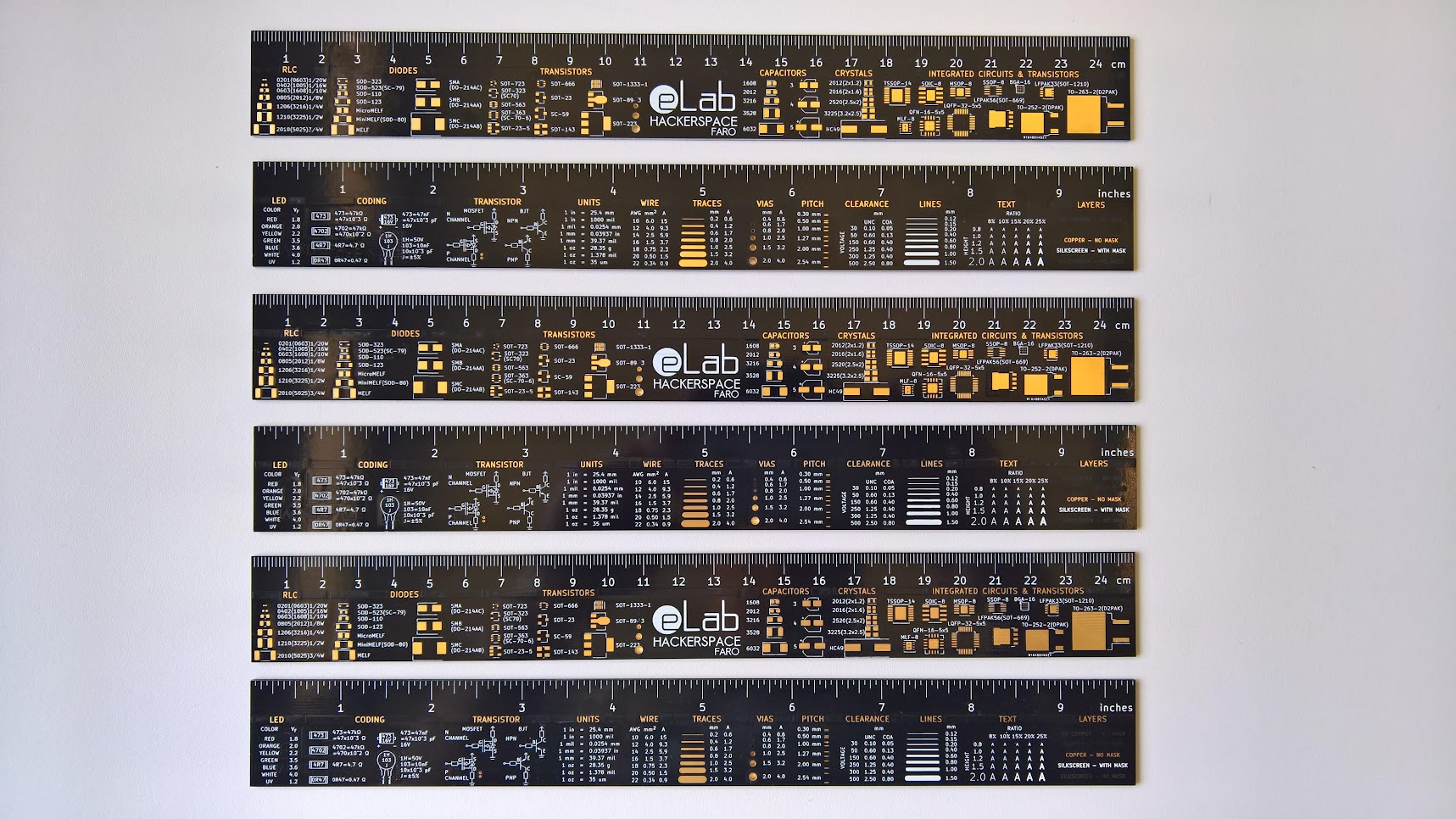 I’ve chosen the ENIG finish for two reasons, first I thought it looked better with the black soldermask, and second, it was a surface finish that I haven’t tried before,  so I wanted to try. 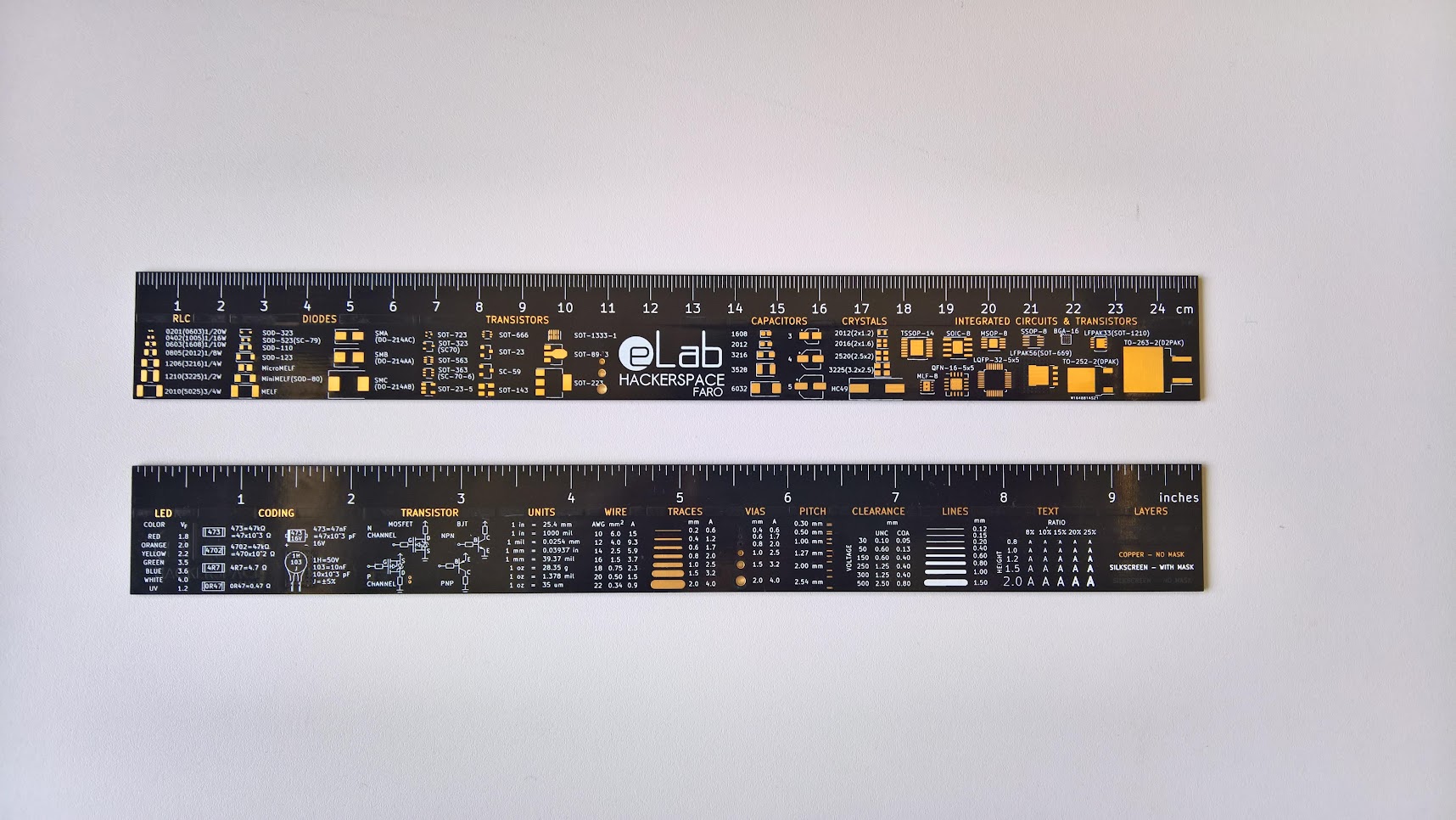 I am really happy with the result, the copper layers seem to be very precise, the soldermask has really nice quality and the silkscreen text and drawings came out more perfect than I thought. I say this because I’ve designed lines and texts way thinner than the minimum recommended width, so I thought it would be illegible, but everything looks great and can be easily read. For instance, the text table on the back: 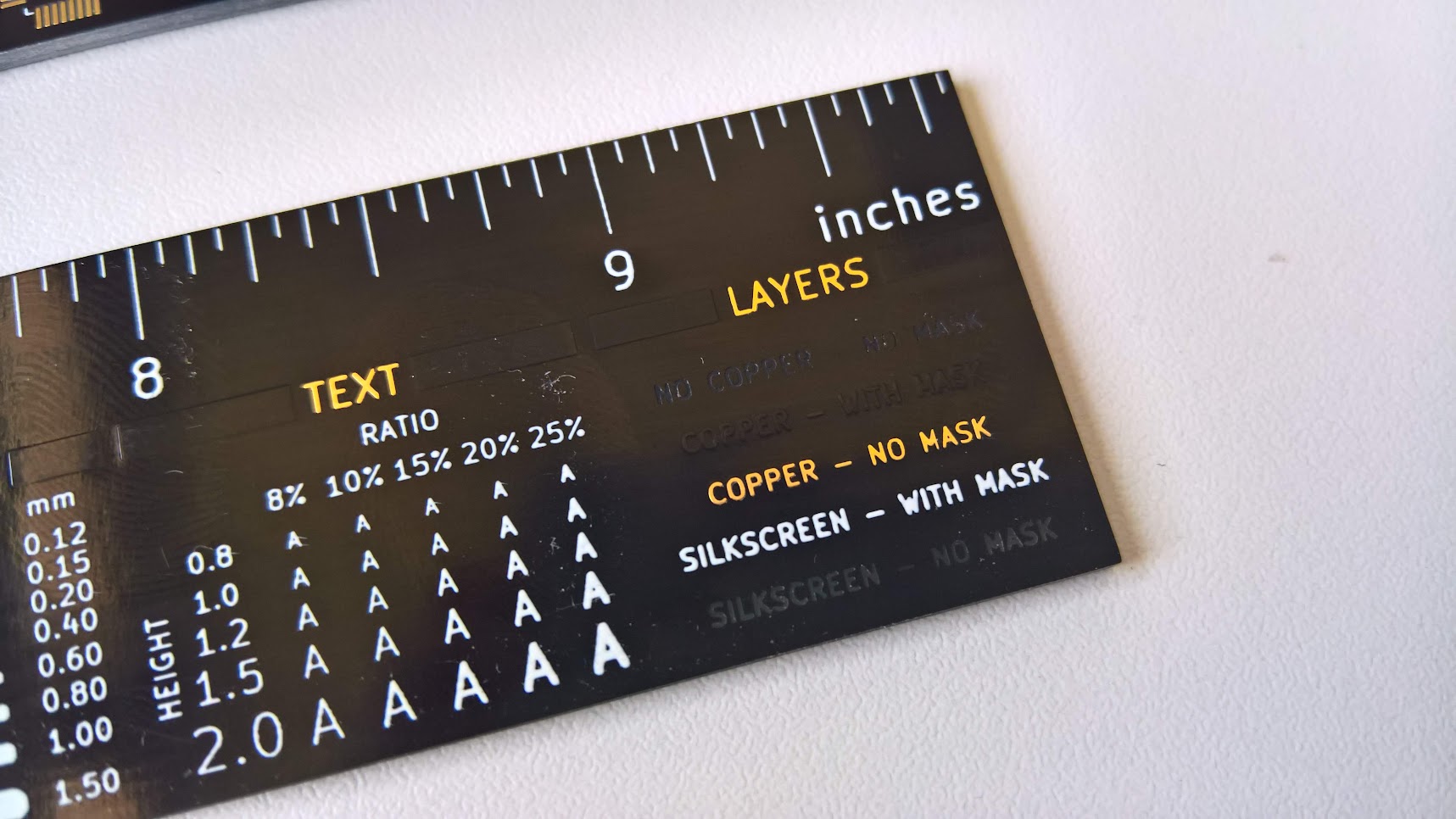 While most PCB services don’t recommend a silkscreen text height smaller than 1mm, and line width less than 0.10 mm, I did that here and still came out perfect. For example the text height of 0.8mm with a ratio of 8% means it has a text line width of 0.064mm, and it can still be perfectly read. This is honestly what surprised me the most, because sometimes, there is a lot of info we want to add to a PCB and not a lot of space to put it it, specially in very small PCBs, and small text like this is the only option.

In the picture above we can also notice something else, the layers section on the right, the last line says “silkscreen – no mask” almost unreadable, this is actually a very good thing. It means they use the mask stencil before applying the silkscreen layer, which means getting silkscreen ink on the copper pads it will never happen, so it’s a sign of good quality and good fabrication process.

Even in this part of the ruler with the SMD and capacitor coding, and specially the transistor application examples, the silkscreen proves to be great. I was afraid most of these texts and drawing might end up smudged and unreadable, but everything looks nice and perfect! 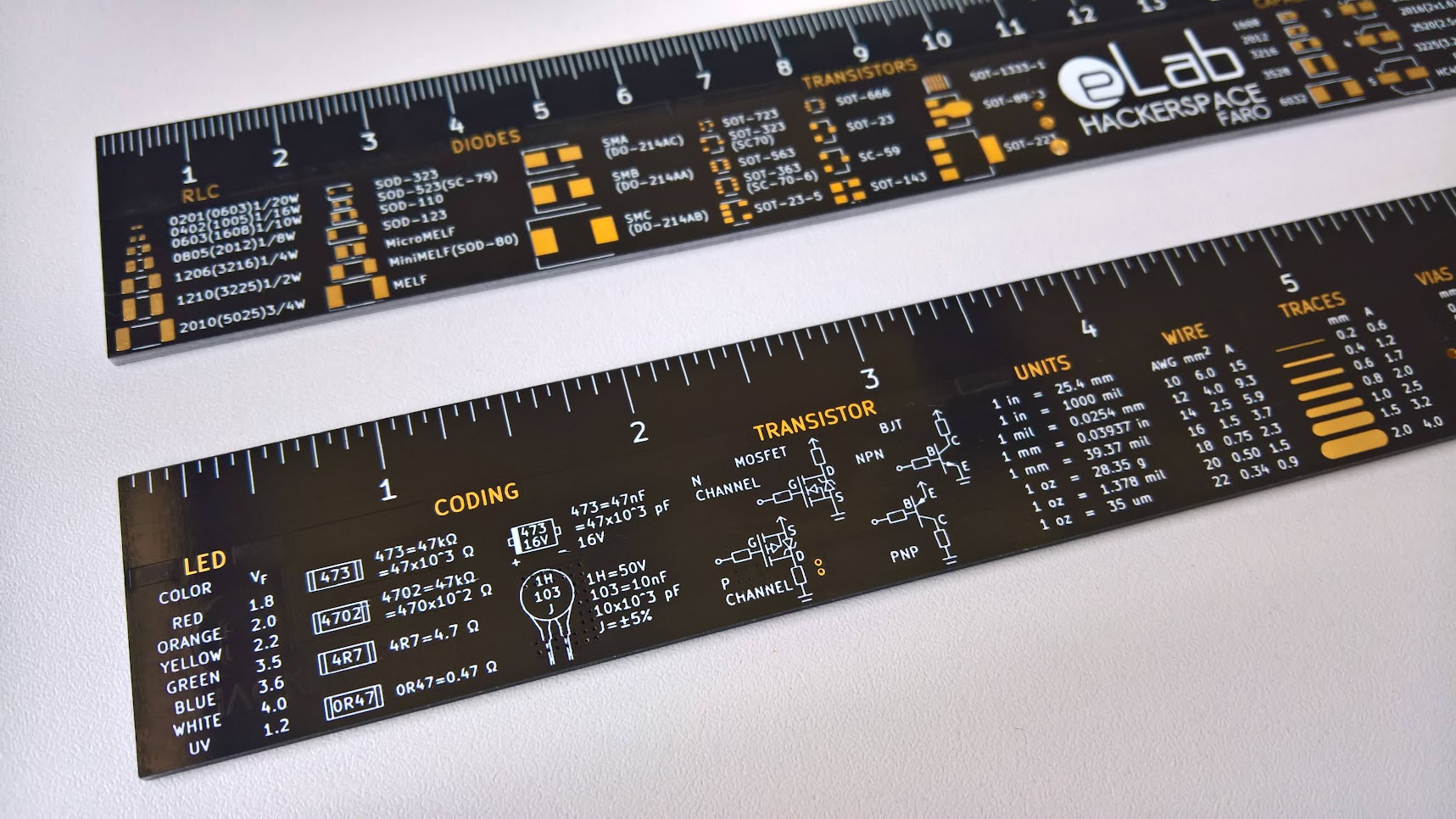 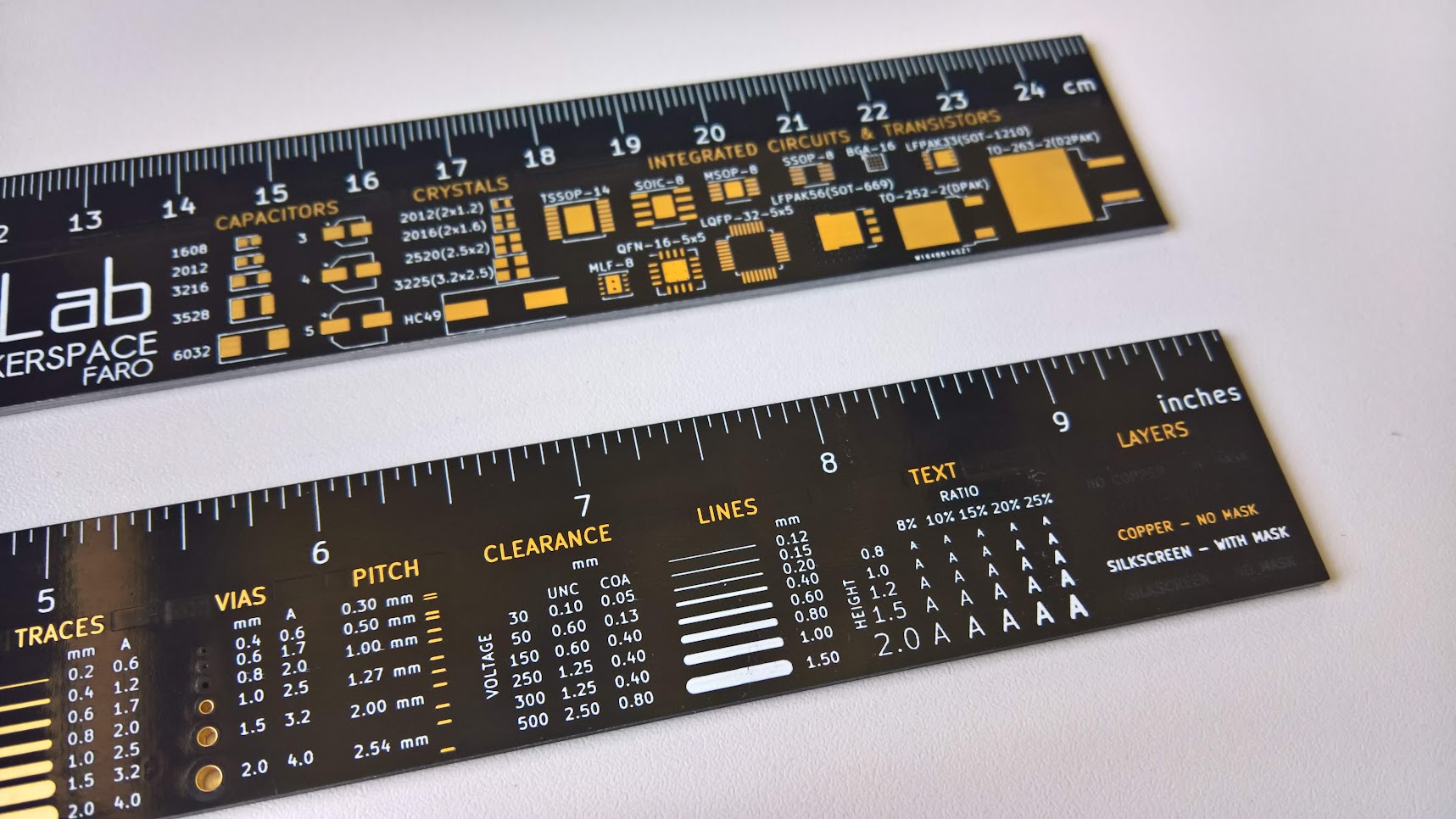 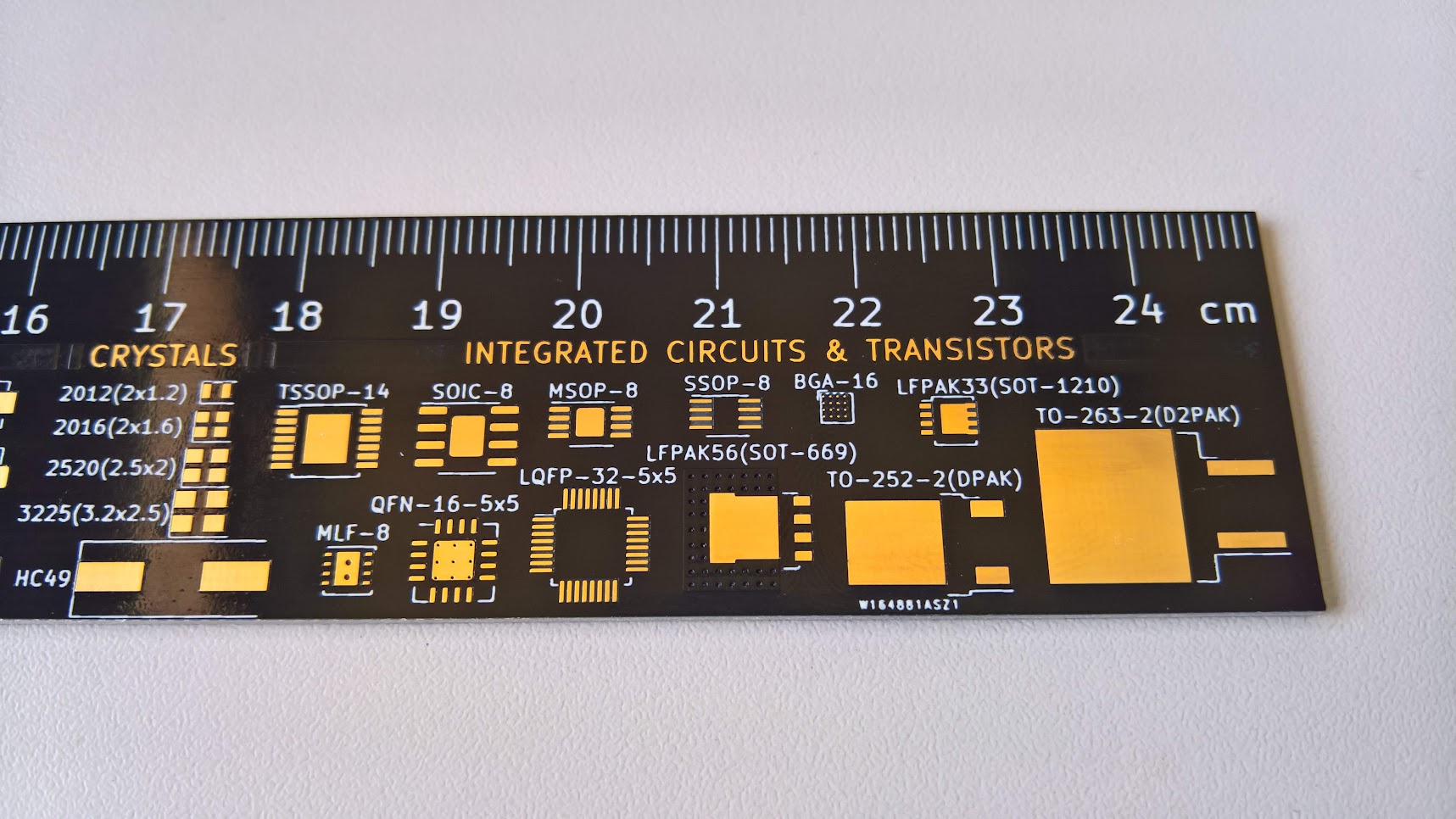 All the footprints on the front side look amazing as well, highly detailed, everything you would expect for a professional finish. Even the smaller footprint of the BGA-16 looks incredibly nice. I tried to lightly scratch the soldermask to see if it came off easily, but it actually holds really well. The only thing I didn’t like so much was some  whitish stains on some of PCBs, but by wiping them with a paper towel they came off fast so no big deal. 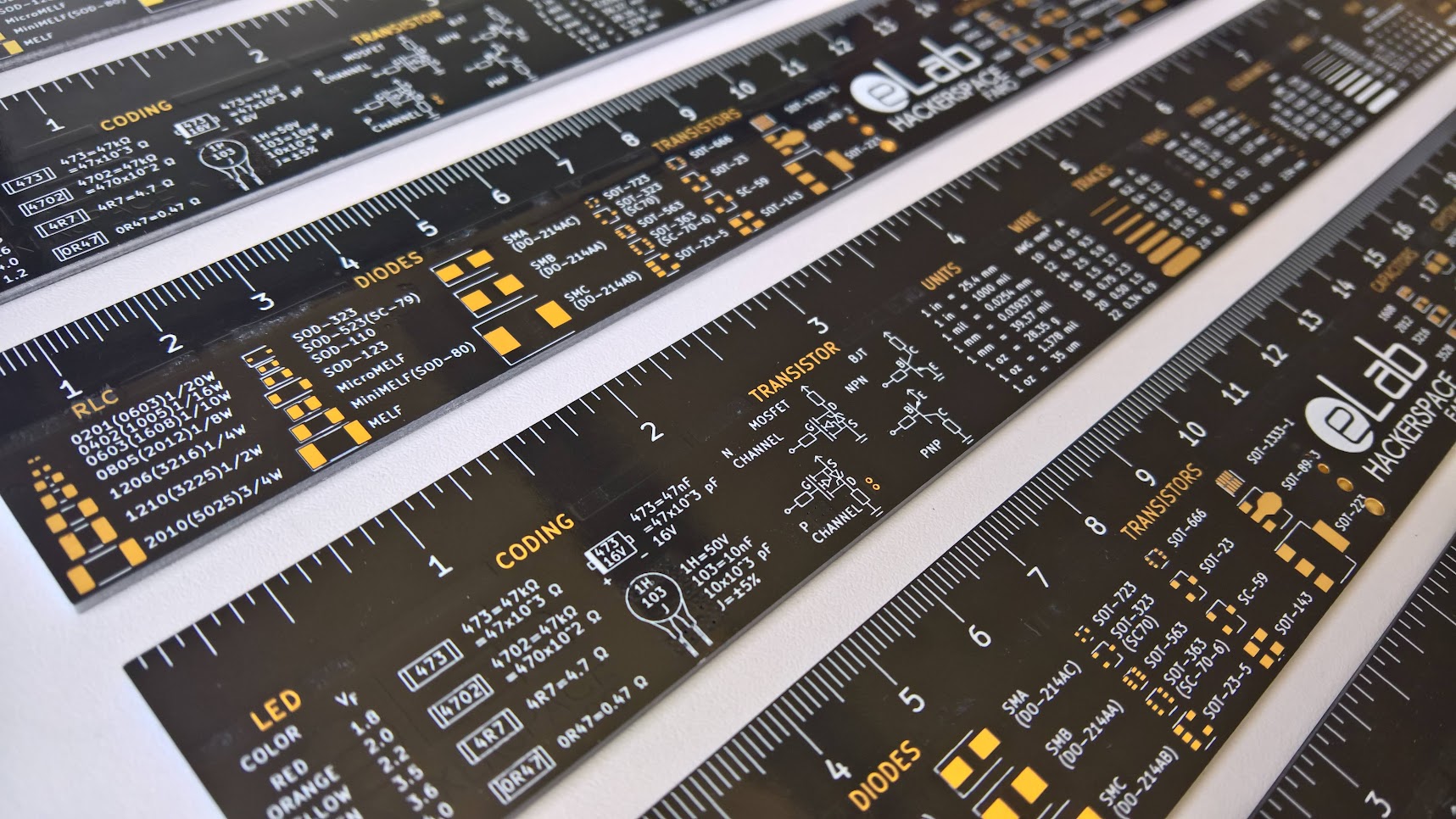 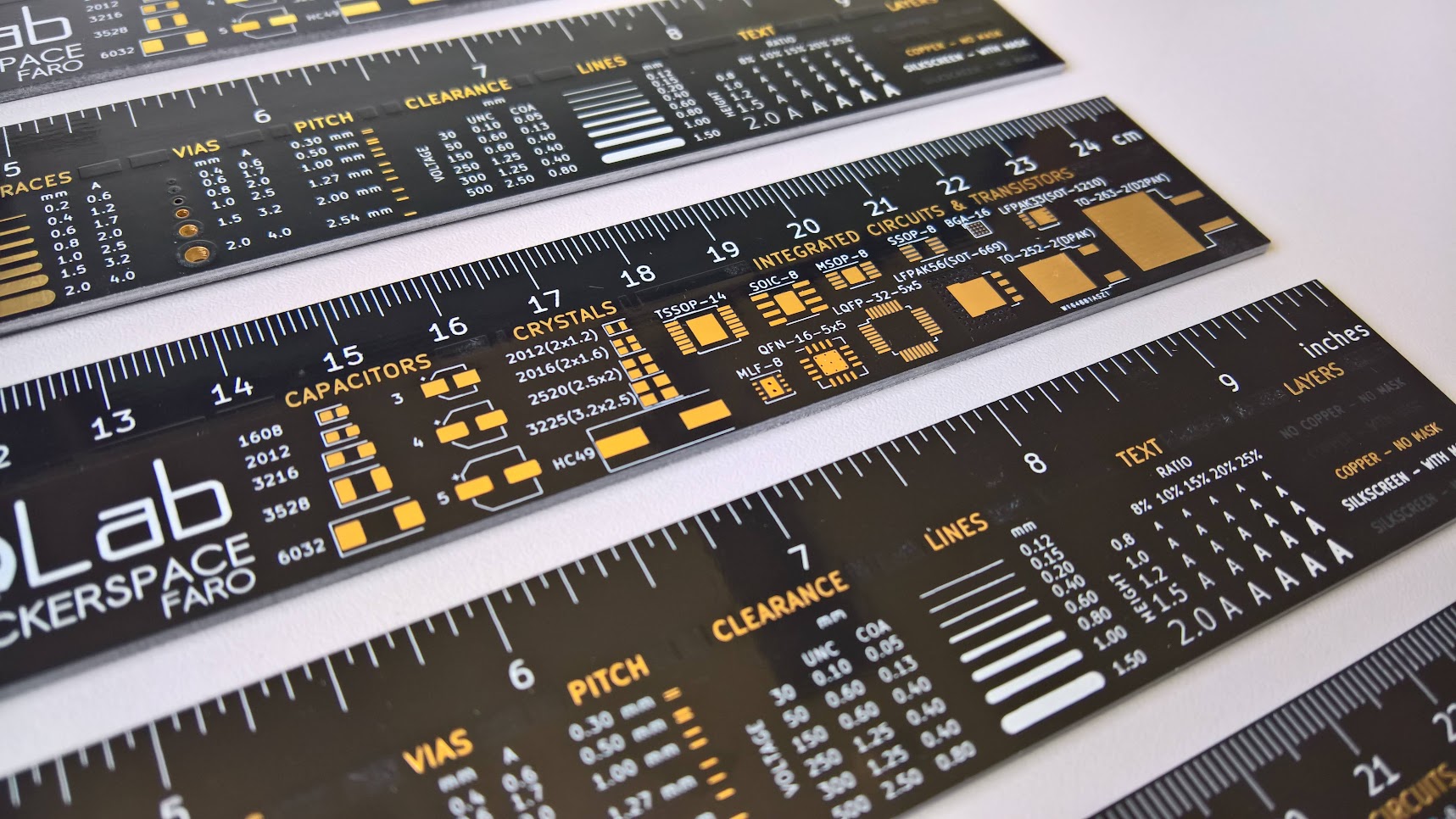 And that’s pretty much it. I am super happy at how they turned out, and very thankful to PCBWay for supporting us with this offer, please check them out, their service was great, super professional and fast.

If you liked them and want to get your own, you can buy some in here.

Is there a file I can use to print my own?

Hi James, sure, you can print them directly via PCBway, here:
https://www.pcbway.com/project/shareproject/eLab_Hackerspace_PCB_Ruler.html