A few years we saw an interesting video by Grant Thomson using an old microwave transformer to melt some things. We liked the idea, and since we have a lot of old microwaves lying around here we thought it would be cool to make a spot welder. 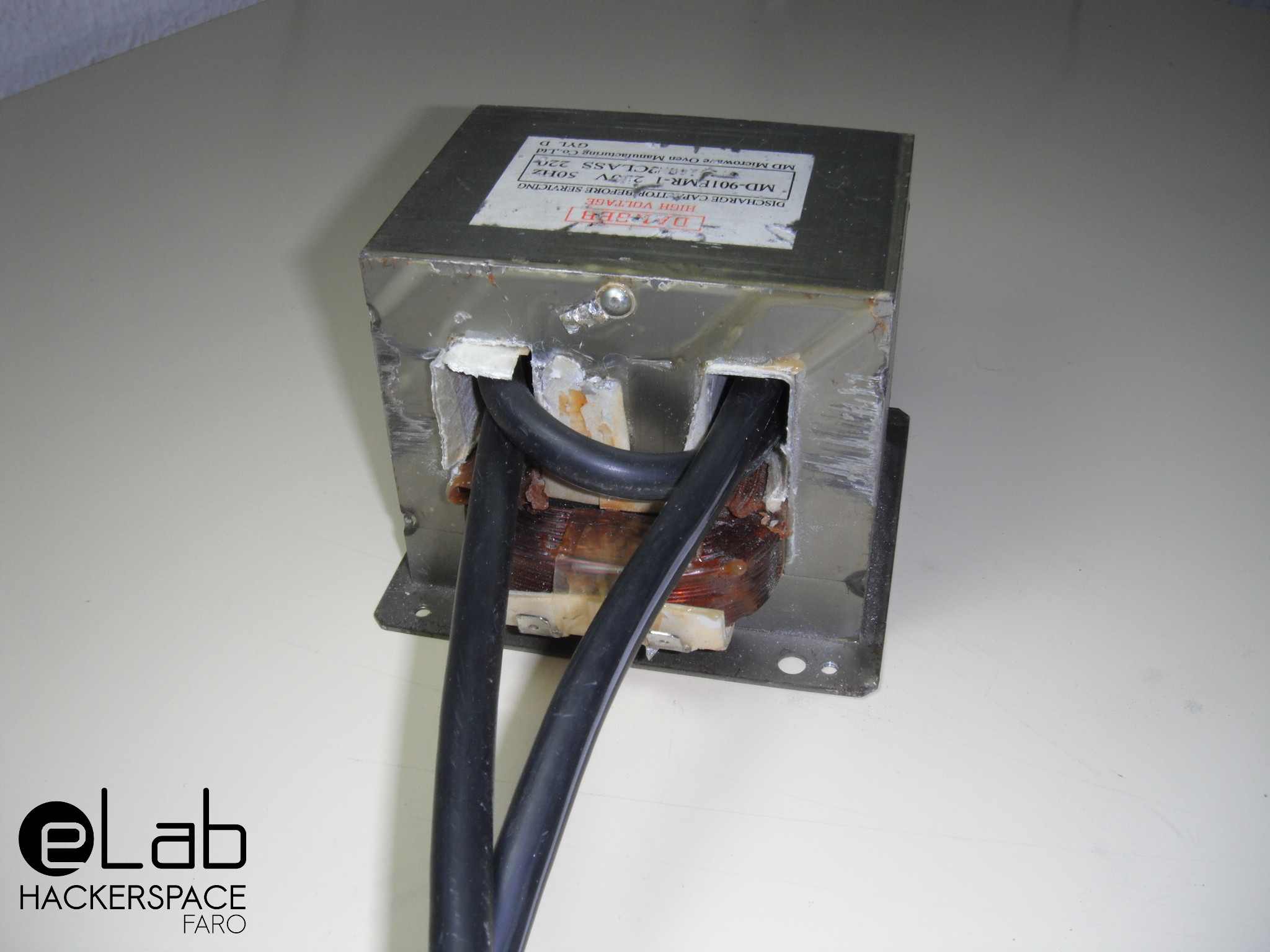 These transformers are commonly called MOT (Microwave Oven Transformer). Warning: Be very careful when working with MOTs, they can generate high voltages which are very dangerous and can kill you! So be sure to take all precautions and pay attention to the work your doing.

Now, the idea is quite simple, microwave ovens have a step up transformer inside, this takes the mains supply voltage and creates a high voltage low current output for the magnetron, which generates the microwaves. This transformer is usually powerful, in our case we’ll be using a “MD-901 EMR-1” which has 1500W.

A transformer can be a step up transformer to achieve higher voltages or a  step down transformer to reduce the voltage. Physically speaking they are basically the same thing, but if we consider a specific coil to be the primary coil we can analyse it like in the following example.

Other formula to remember is that power P=VI, where V is the voltage and I the current. The transformer has the same power in the primary and secondary coil, so P=V1xI1=V2xI2, by knowing the voltage we can calculate the current in each coil. 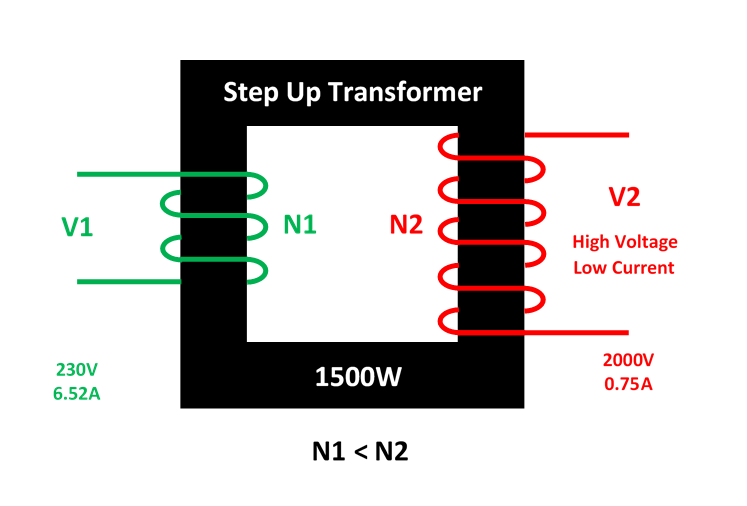 MOTs usually have secondary output voltages around 2kV, so that’s the value we considered for this example.

Now for a spot welder what we need is current, so we need to modify the transformer to get many more amps! Since the power is a constant, to increase the secondary current (I2) we need to decrease the secondary voltage (V2). We know that the voltage is directly related to the number of turns, so by reducing it we will achieve our goal: 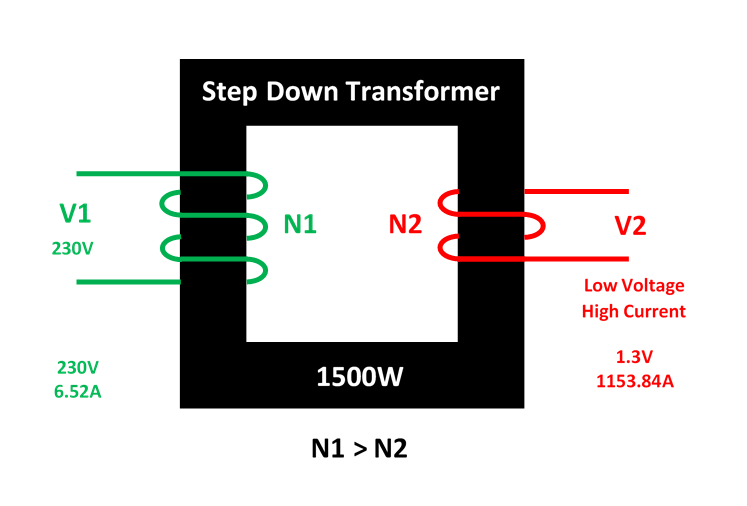 As you can see, by reducing the number of turns until a point where you get 1.3V on the secondary coil, we’ll get a secondary current over 1000A! This should be enough to melt some stuff.

So the first step is  identifying the secondary coil of the MOT, we know it’s high voltage but low current, which means it will have more turns than the primary coil and a thinner wire. Now we’ll remove it from the iron core: 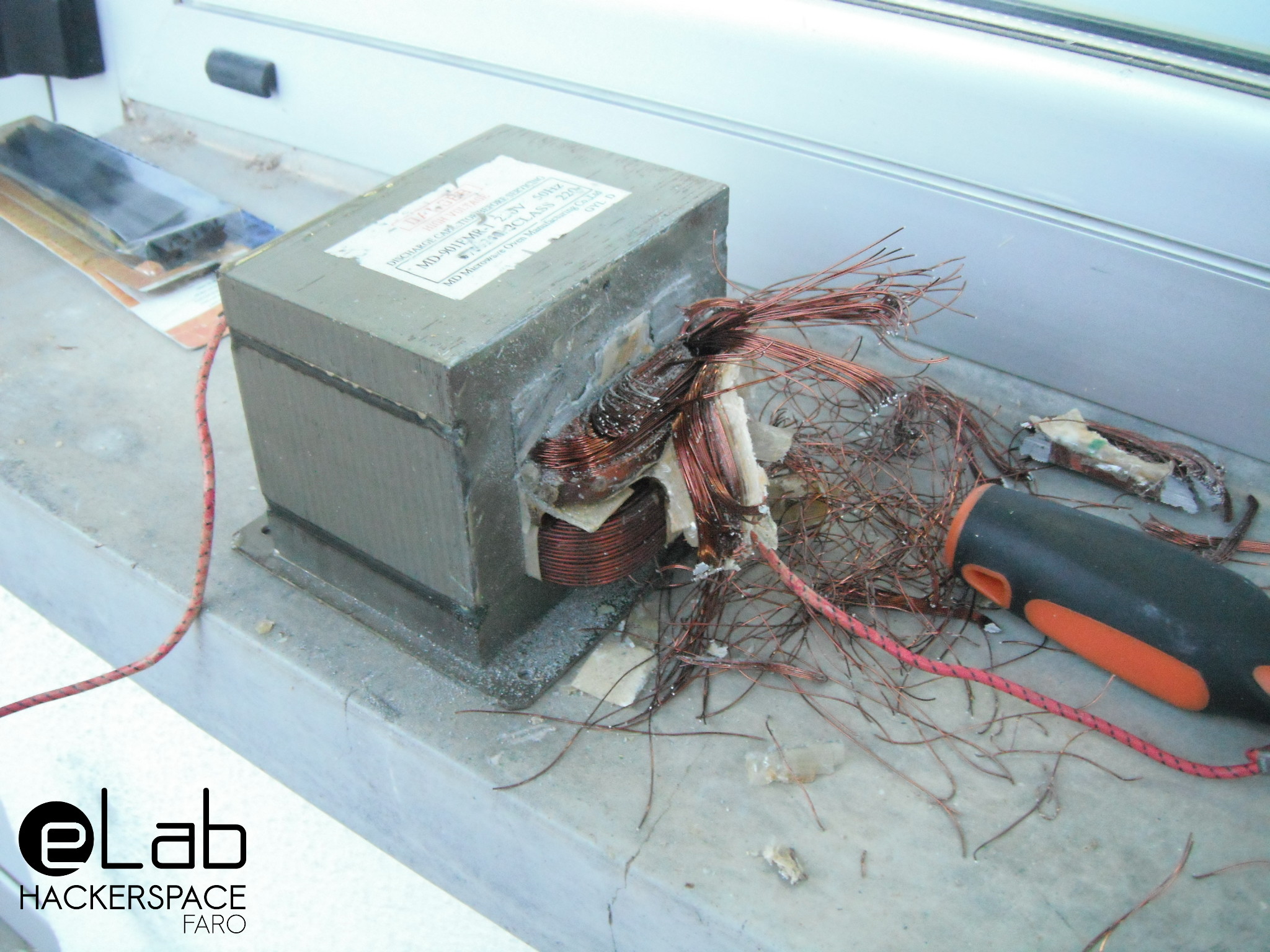 This might be a little tricky.. It’s a bit more complicated than it looks. We started by using some pliers and a saw. Later we moved on to the Dremel: 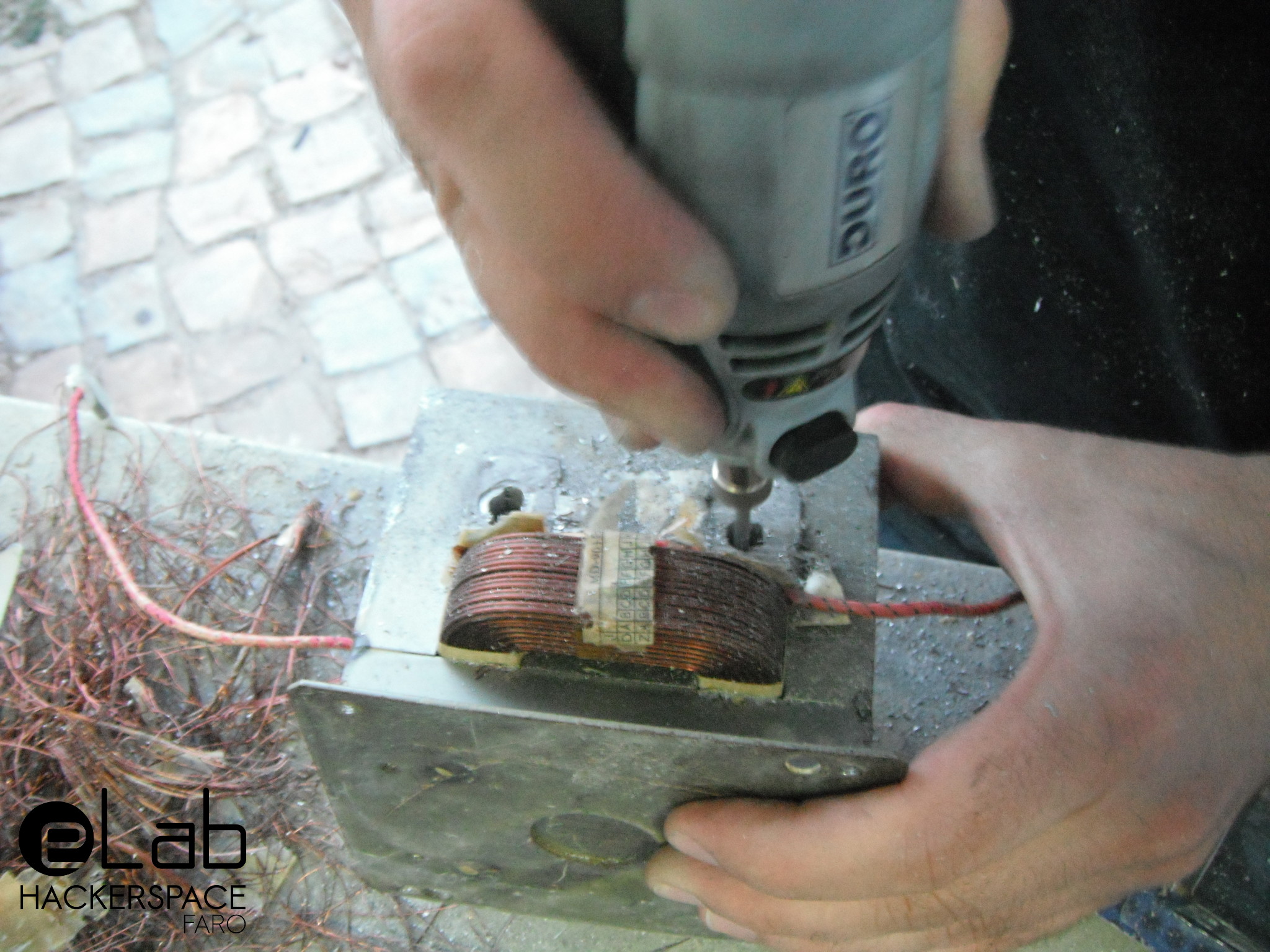 To create some space inside. 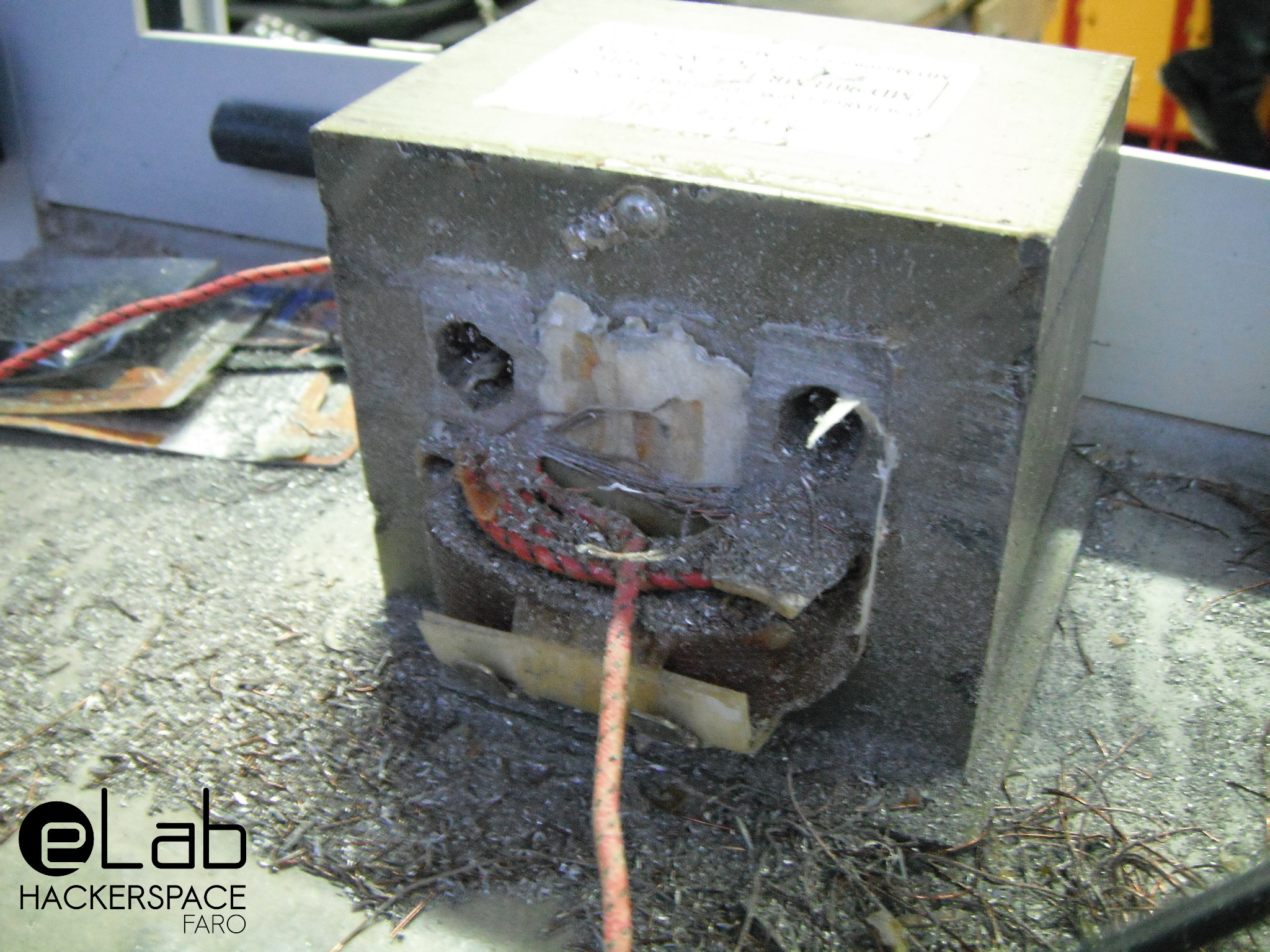 And later with a hammer and a metal rod, which did the trick: 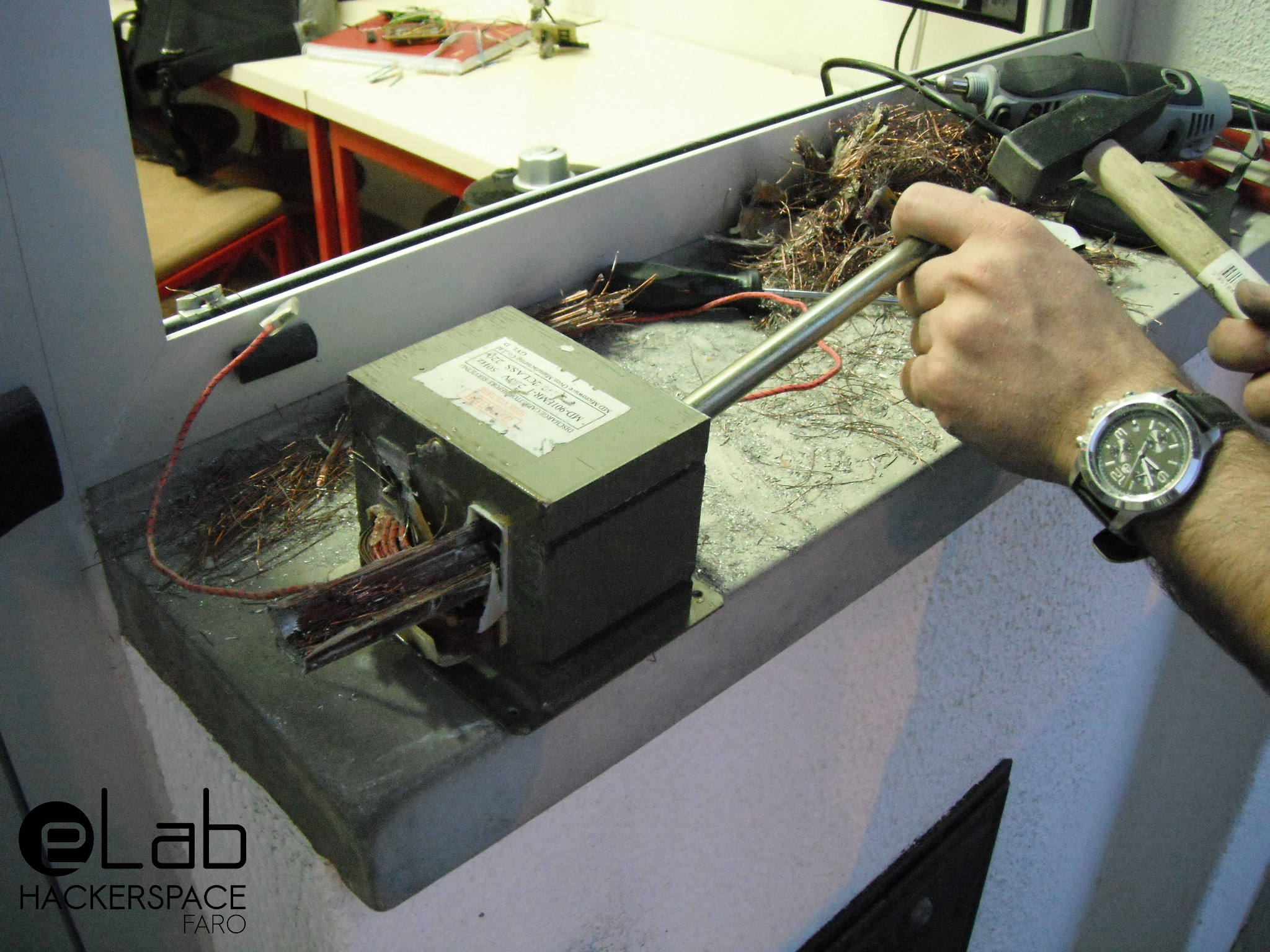 Next, wiring up the new secondary coil. Remember, this coil will now have really high currents, according to our previous example, it can take over 1000A, so this means you’ll need a big wire gauge. We used some bits we had lying around with 16 to 25mm2 (5 to 3 AWG). Which by the way is not enough, so don’t keep it turned on for long periods of time, it will warm up a lot! 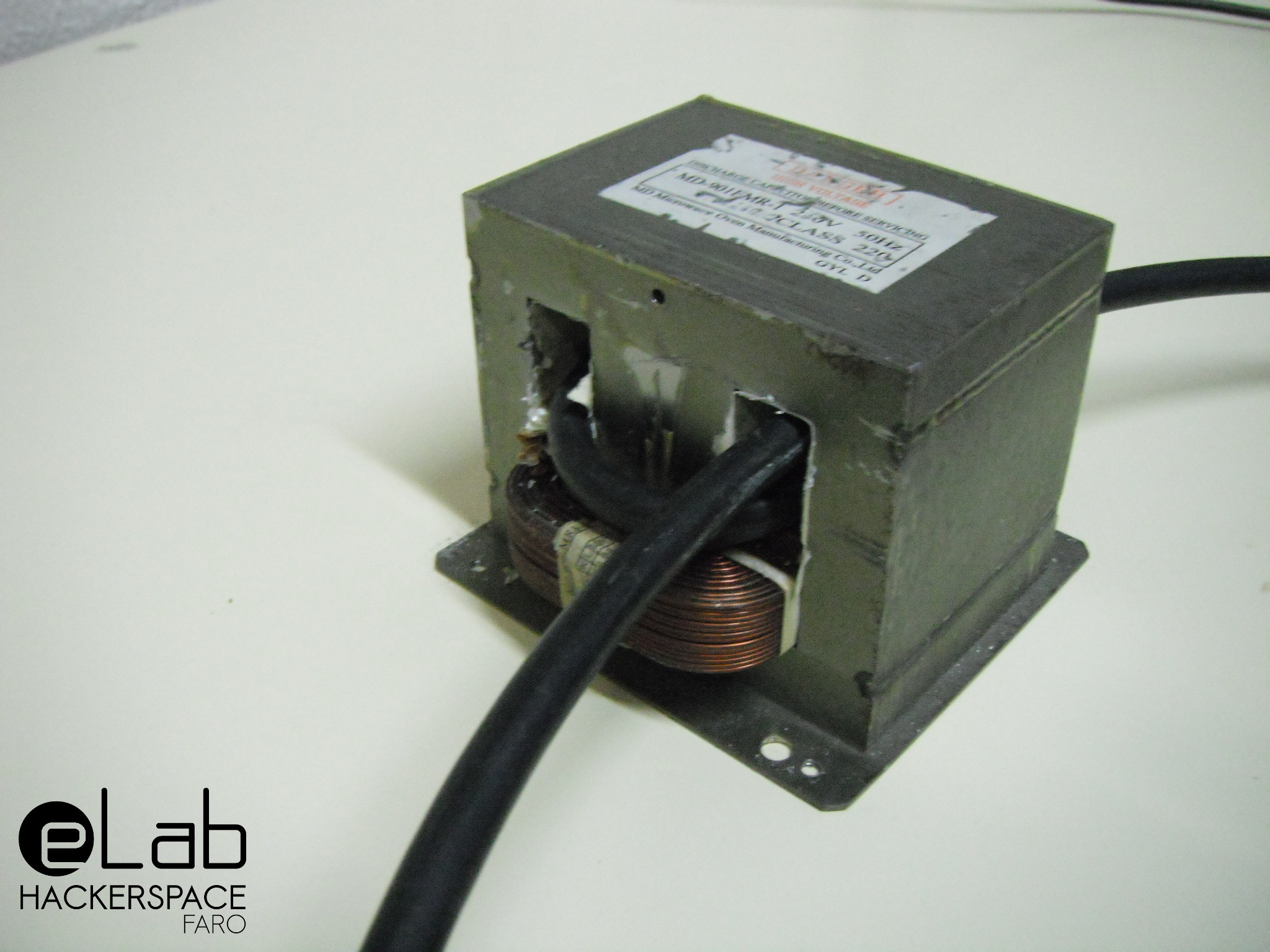 One to two turns should be enough to get the effect we want. You can measure the voltage output now, should be around 1 to 3V. 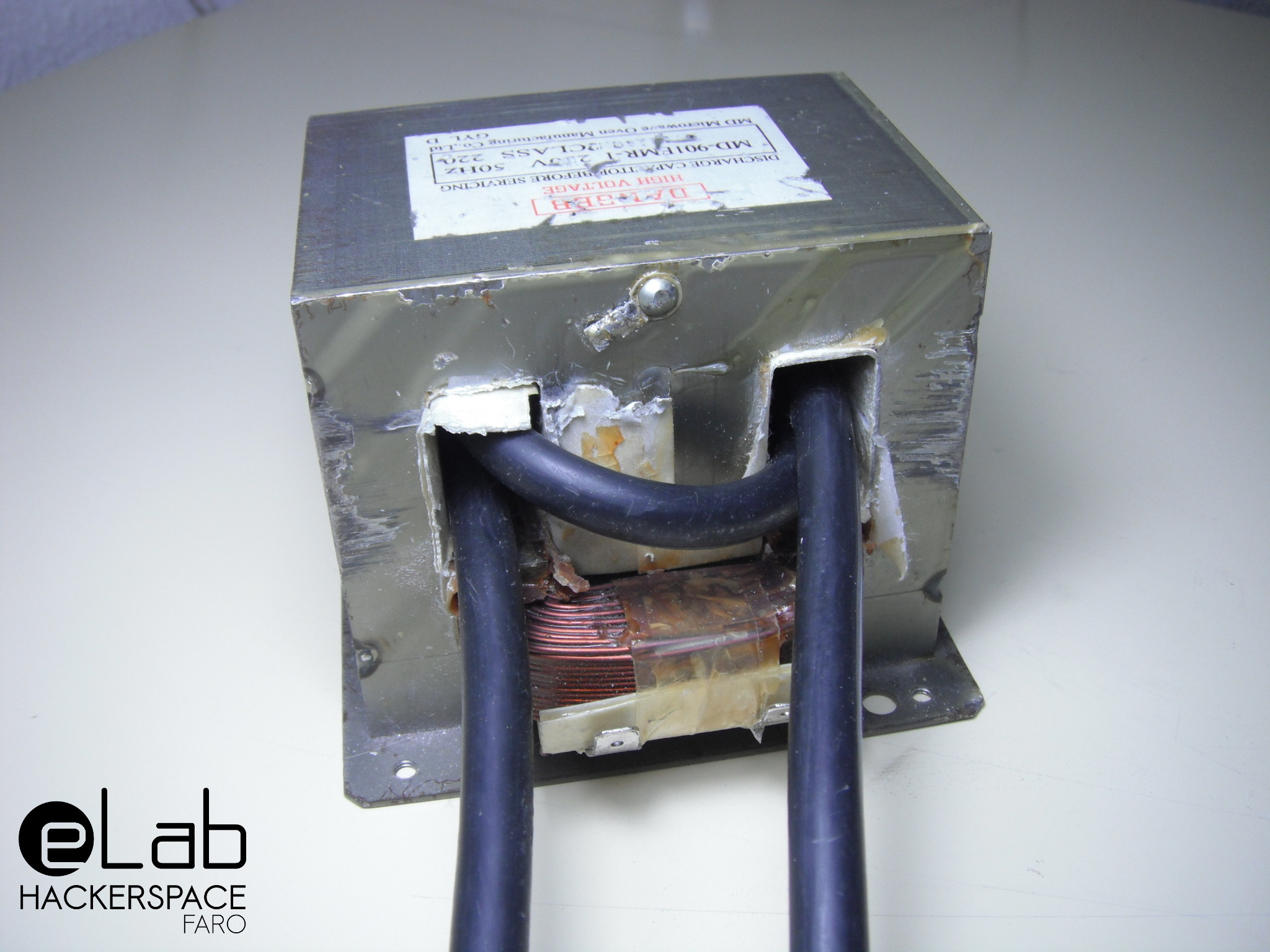 Finally it’s time to try it up with some metal sheets: 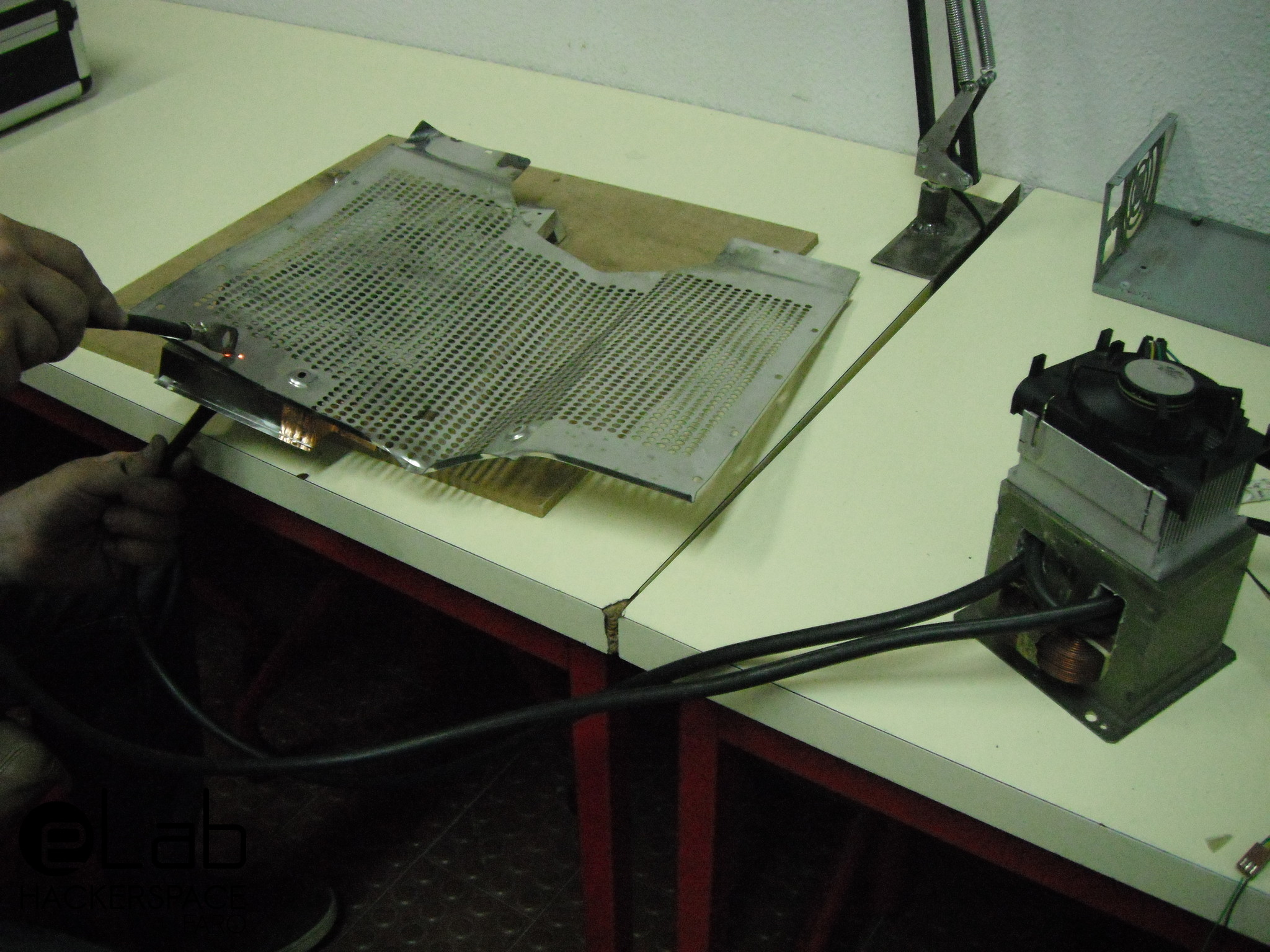 It does work nicely! Since the voltage is low, you must be sure to use conductive metal parts, if they have layers of paint or something that keeps the current from flowing, it won’t do anything. 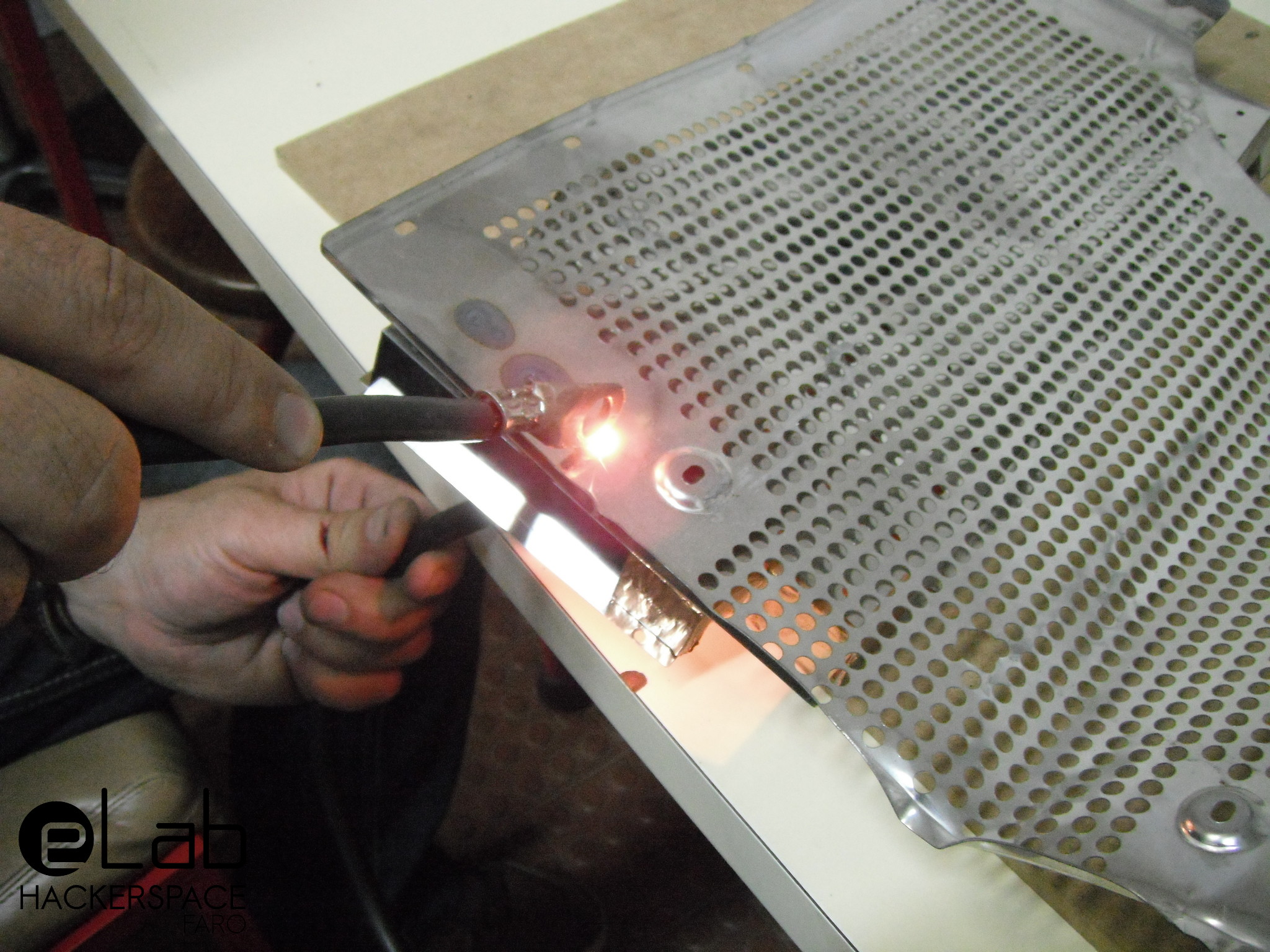 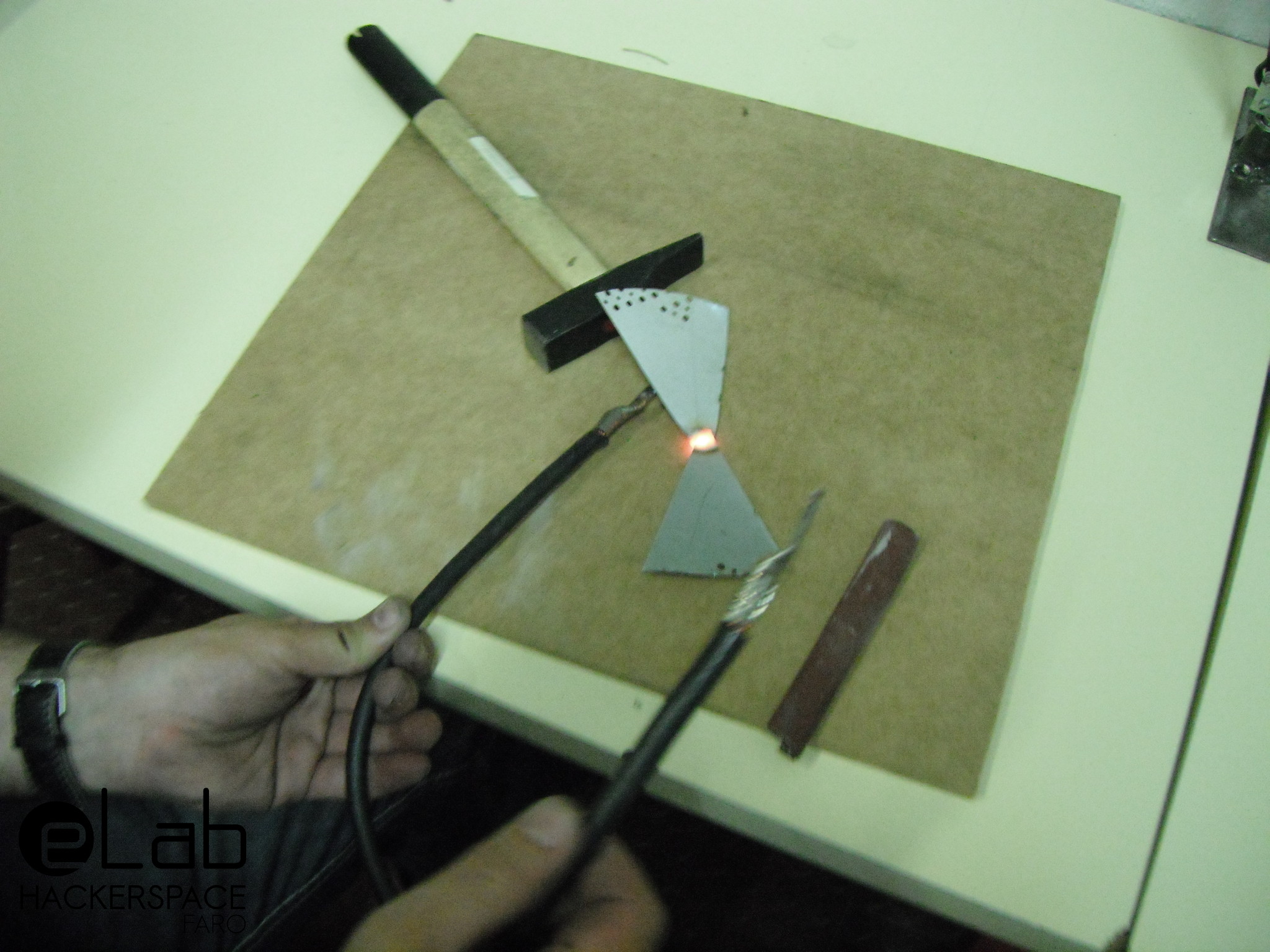 Never gets old! There are always more metals to melt down! 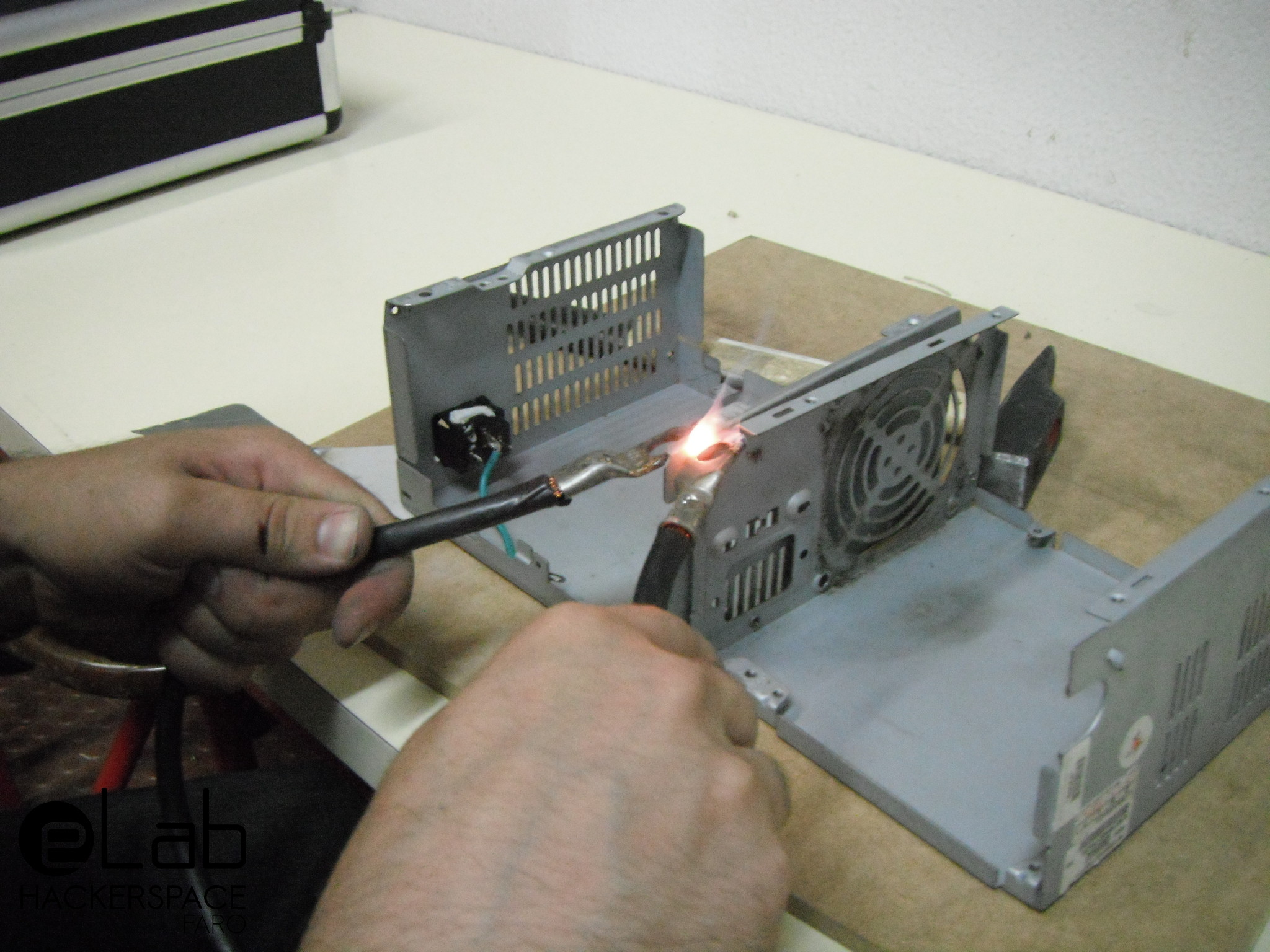 And that’s how to make a cheap spot welder. I actually built a case for it with some old desktop computer closures, and copper tubes as arms, but I didn’t get a chance to take a picture before it was upgraded to a new structure, which by the way will be published here soon.

Be careful when operating MOTs, they are powerful and dangerous, the secondary output is high voltage by default. You if don’t know how to work with high voltage safely, then don’t try it yourself.