Power over Ethernet or PoE, is the technology used for power transmission in network equipment, via network UTP cable, together with data. PoE is useful in situations when we want to connect network devices that are far away from a power source. In this situation we take advantage of the Ethernet cable, because there are 4 pairs of wires, but for the majority of networks, only 2 pairs are used for data transmission. PoE uses 2 unused twisted pairs, for electrical transmission needed to power the device.

There are several architectures of PoE and many of them existed before the technology being standardized, due this fact not all types of PoE are compatible. PoE devices receive power directly from the network cable, but should be noted that according the manufacturers, specs like nominal values of voltage and current, and even pairs used to transport electrical energy may be different. 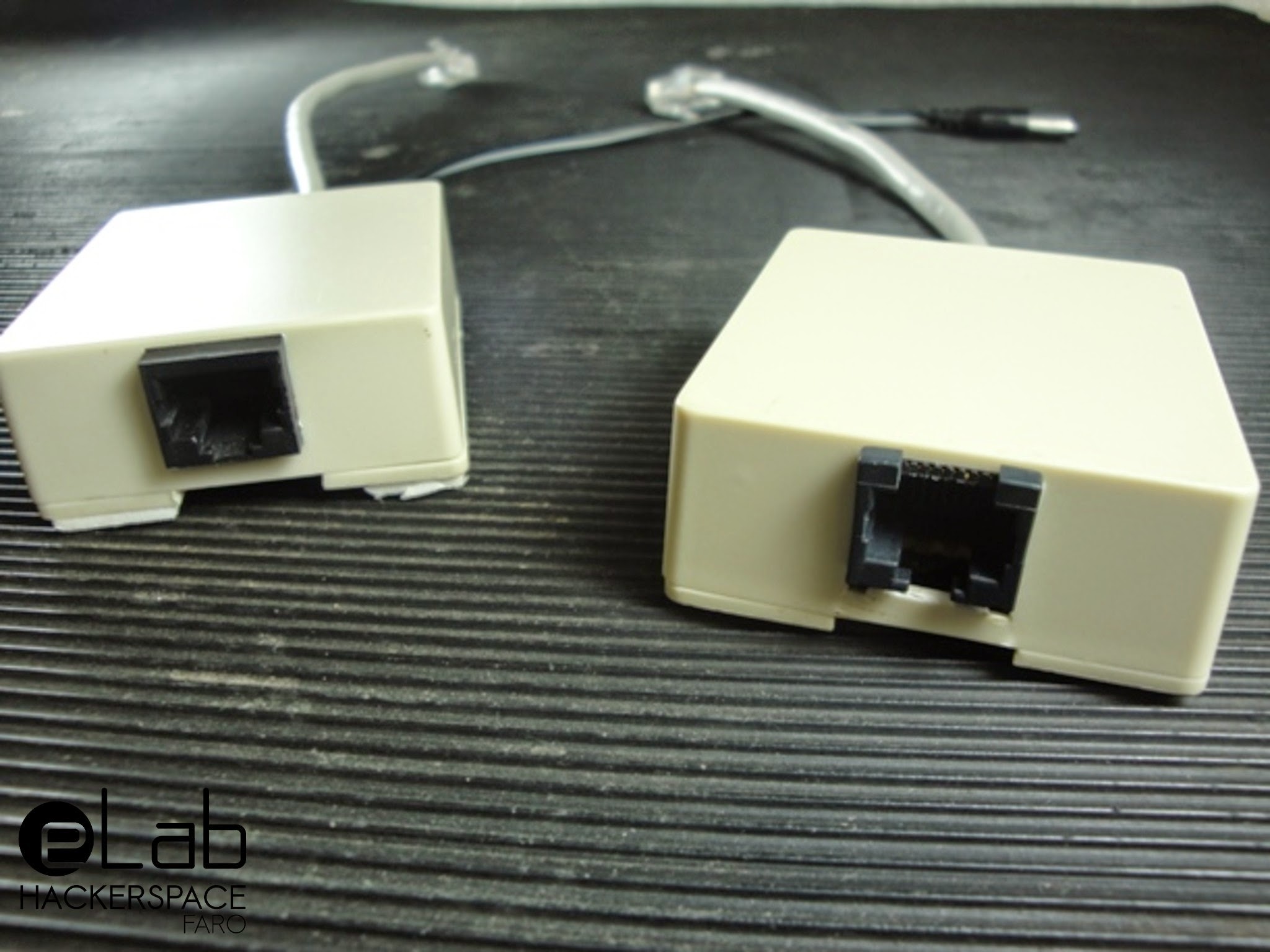 Applying a voltage across terminals not dimensioned for that, may damage the network device. To avoid this, the best way is to make a PoE adapter, separating the two input signals, via two simple circuits, an injector and a splitter. The injector will feed the network cable with power and this circuit is placed near the origin of the installation, where we have a modem or a switch, and of course a power plug. Then we have as outputs of the Ethernet cable, data and power that will connect to the device. Now we connect the splitter circuit, which receives data and power. From this circuit leaves an Ethernet cable and a DC plug avoiding applying unknown voltages to the devices.

As example consider the eLab case, which have a switch on the back of the room and we want to feed a 12V wireless router which is at the opposite end of the room, to obtain greater coverage by departmental area, in a place near a windows without power sources nearby. The network diagram is the following:

In this project we used only recycled components, from old devices, so we had a total cost of € 0.

In our case, we used old phone connector boxes as shown in the following image: 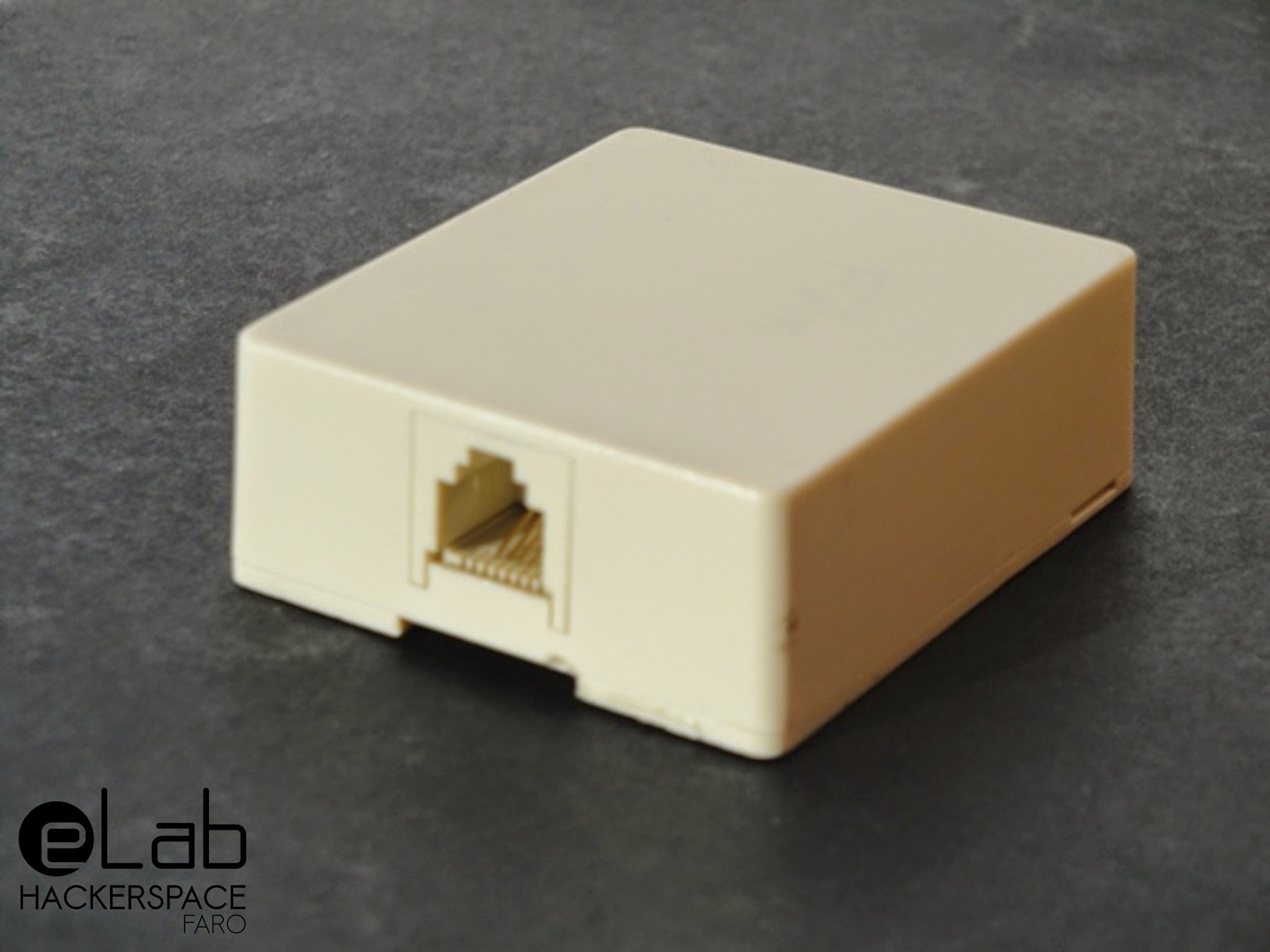 We replaced the RJ11 connectors by RJ45. Starting from two plastic boxes, it is necessary to open a hole to fit the RJ45 connectors and secure them with hot glue. In one of the boxes it’s also necessary to make an opening to DC female connector, for power input, this box will be the injector.

Now to understand the connection, we must understand how data flows through an Ethernet cable.

For 10 and 100Mbps network we have the following configuration in the twisted pairs: 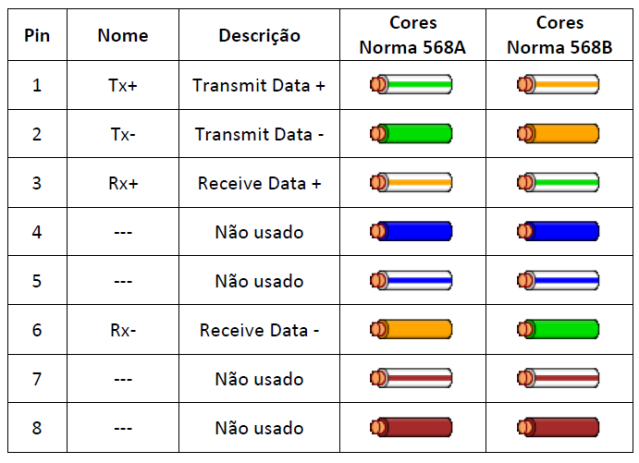 As seen in the table, pins 4, 5, 7 and 8 are not use, so let’s use them as positive and negative terminals for power. We use pins 4 and 5 (blue and blue/white) as positive and pins 7 and 8 (brown/white and brown) as negative.

Regarding the standard of colors, it doesn’t matter what standard is used, however all project should be done with the same standard. In our case we used the standard 568B.

The following figure shows how to identify each pin in a RJ45 connector: 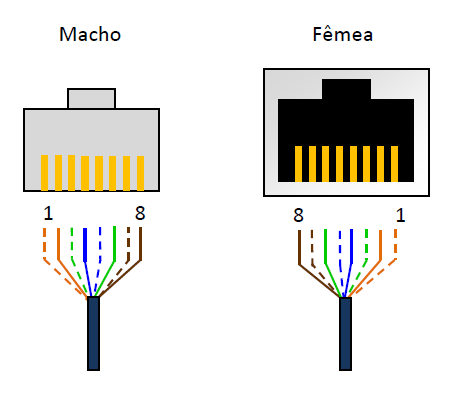 We cut the Ethernet cable to obtain two ends with 15 cm long. This also can be made with UTP cable crimping the RJ45 connectors.

One of the tips will be the injector connection to the Switch and the other will connect the splitter circuit to the Wireless Router.

In these two tips, pairs blue and blue/white and brown and brown/white are cut and left open. In no situation they should be connected DC power at the risk of damaging the Switch or Wireless Router, so make sure they are left opened!

The connection should be made according with the following schematic: 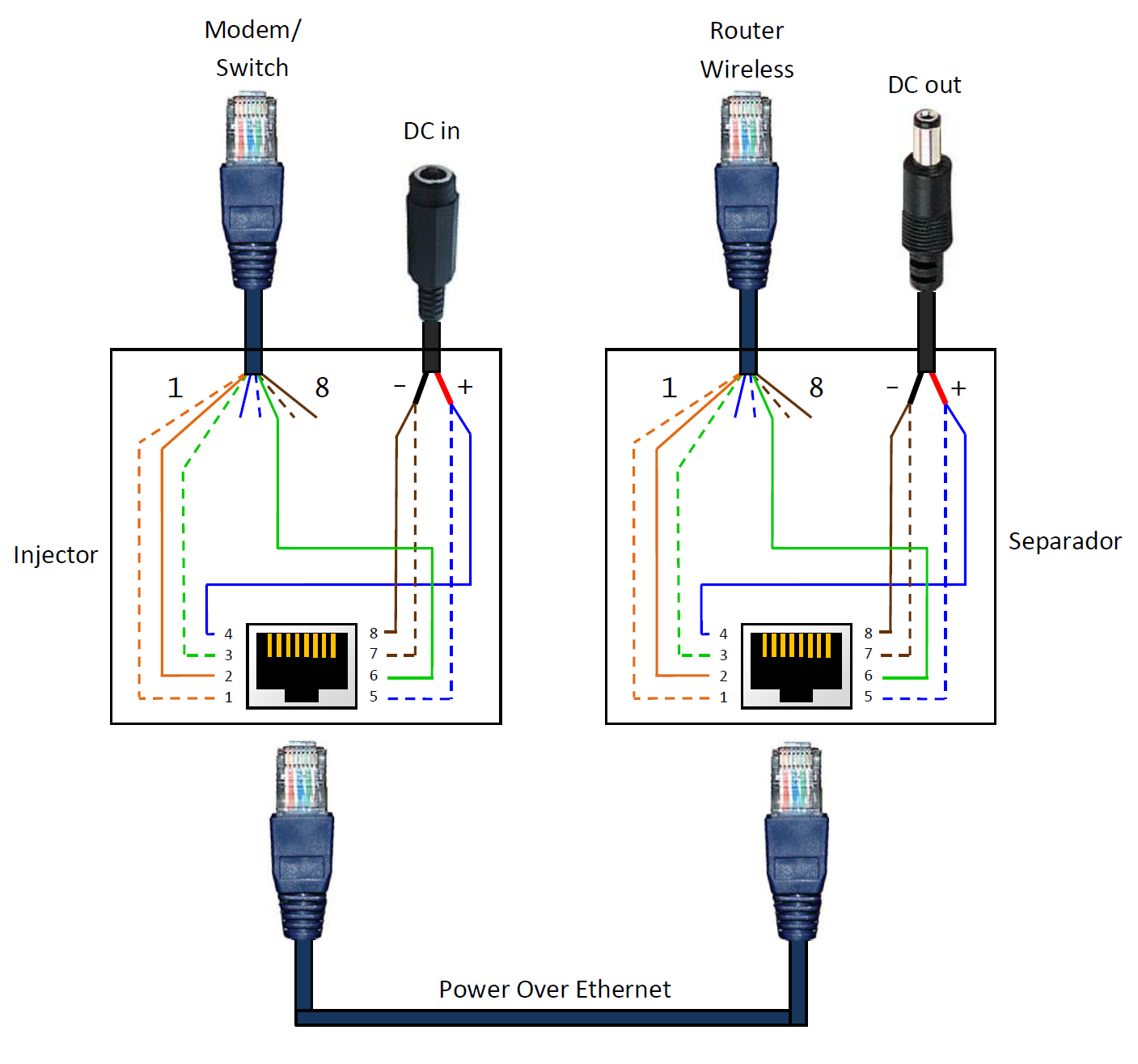 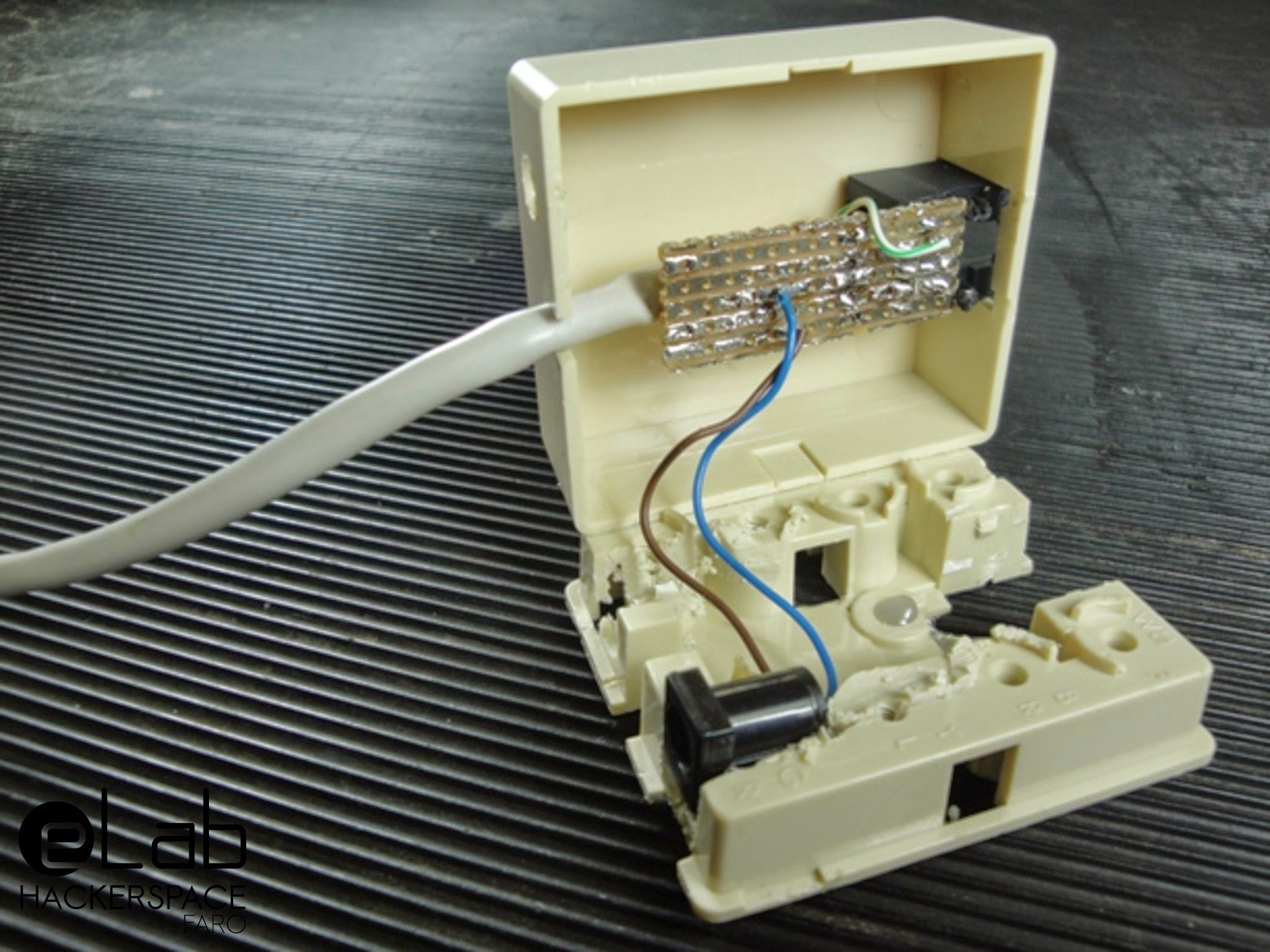 Here you can see the tip of the cable that will come from the switch and the DC input connecting to the RJ45 plug. If you look closely you can notice that the RJ45 connector is a little melted, this is because the material is reused from old electronic devices, the same goes for the perfurated PCB. There are however connectors with mechanical contacts that don’t require any soldering.

And here is the splitter: 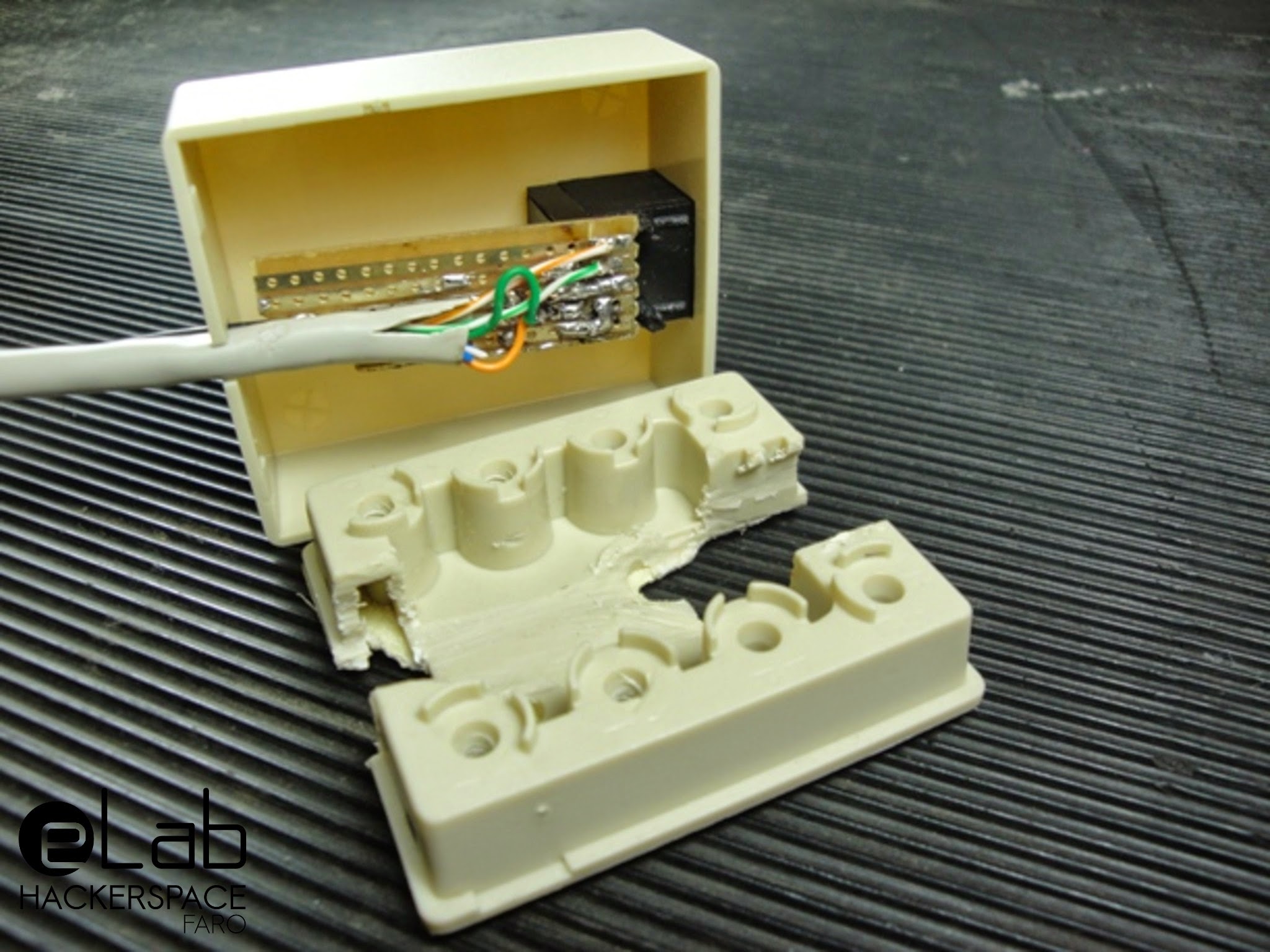 In this image you can see the RJ45 connector that will receive the PoE signal, where then the data will be separated from the power supply. The data will be sent through that tip of Ethernet cable, which will connect to the Wireless Router. The power supply is sent through another cable and will connect the DC plug to power the Router, however it’s not visible in this image for it is behind the Ethernet cable.

Before trying it, we tested the conductivity of each pin, for that we connected the injector and the splitter with an Ethernet cable and then checked if pins 1, 2, 3 and 6 had continuity, from the injector to the splitter, and the same with the DC connectors. We also tested if pins 4, 5, 7 and 8 didn’t have continuity, once they are cut in the adapters and left opened in each side. Finally we also tested adjacent pins to make sure there were no short circuits anywhere.

Finished and tested, here is how our PoE adapter looks like: 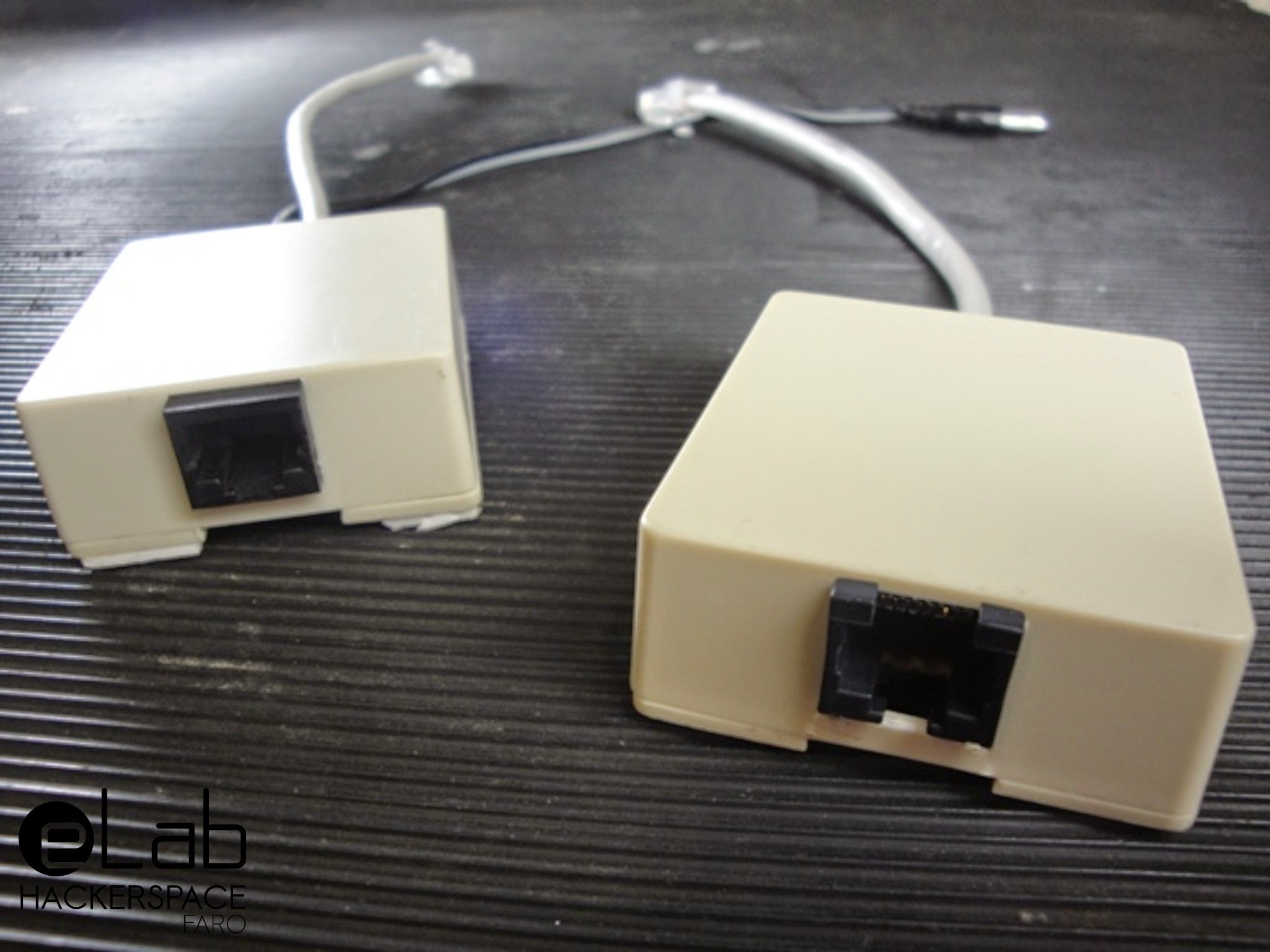 The injector on the right and the splitter on the left, as you can confirm by the DC output.

This is a back look of our adapter: 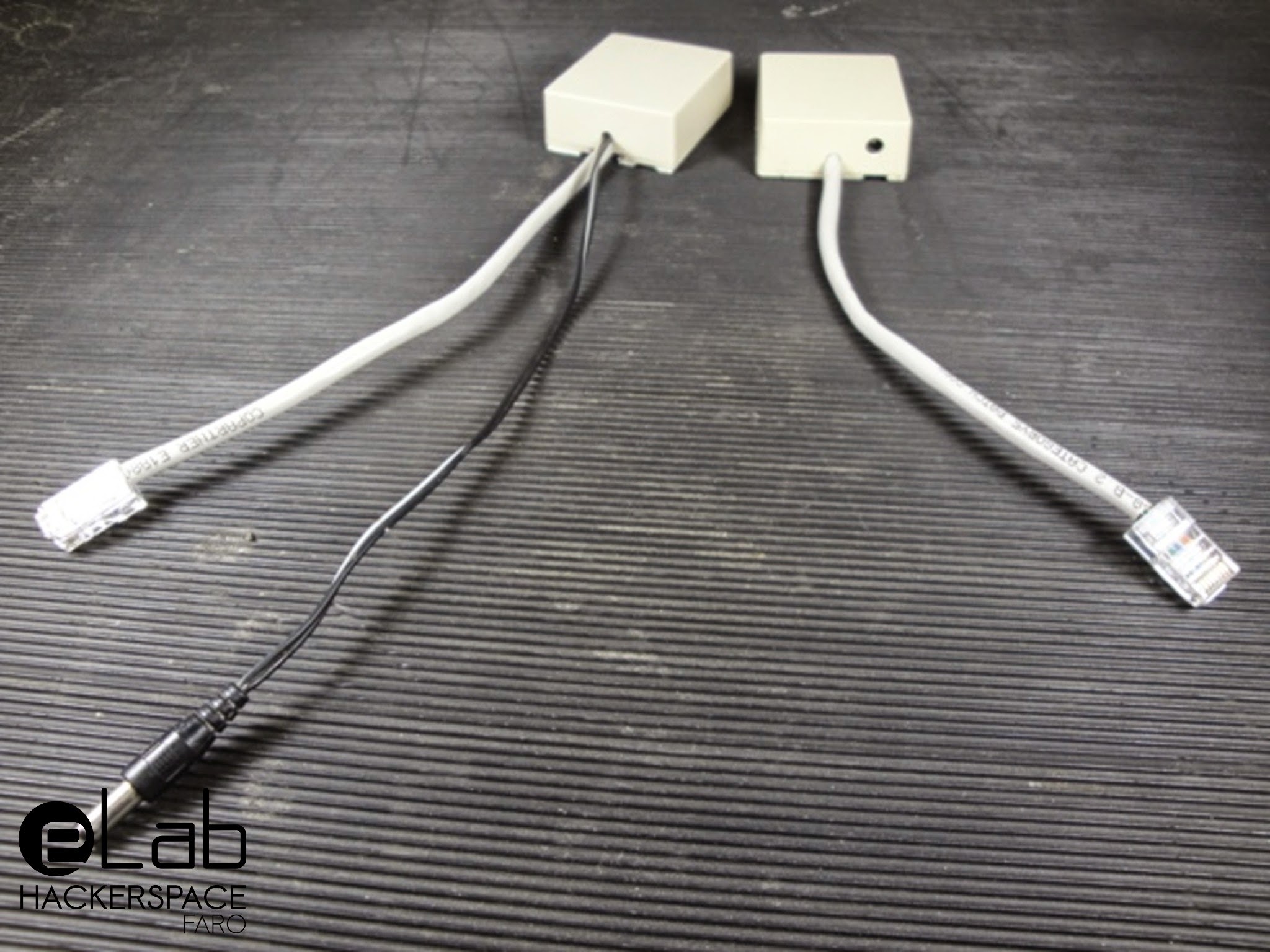 In this image you can already see the DC input on the injector.

For well executed adapters, there is no influence of the power supply on the data cables, there is no interference in the transmission of data packets or in the speed itself.

In the following images you can see the adapters in the place where they were destined to be installed. The eLab network has been working well and there hasn’t been any kind of problem. 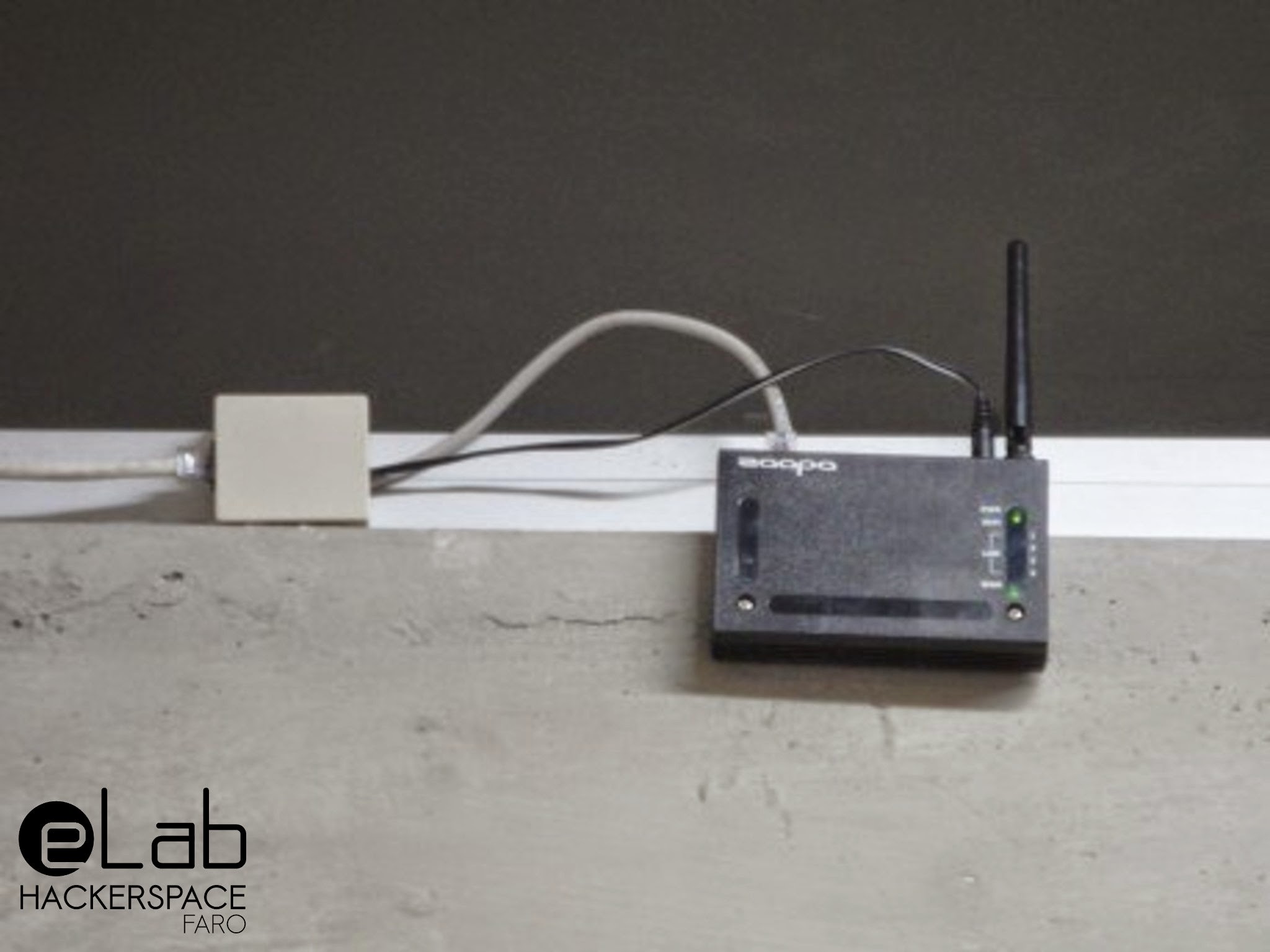 Once again we remind that in the injector and splitter, the tips of the twisted pairs 4, 5, 7 and 8 (blue, blue/white, brown/white and brown) must be cut and left in open circuit. If this is not done or if there is any kind of anomaly that imposes voltage in these pins, the network devices might be damaged. It’s necessary to guarantee that these pins are left opened, preferably even isolated.

As mentioned before, the PoE technology uses the 2 twisted pairs that are not used on the ethernet cable, however, this is only true for 10 and 100Mbps networks. 1Gbps networks already use all the twisted pairs for data transmission, so the PoE technology is applied differently, through a technique called Phantom Power, therefore this adapter is not suited for those networks.

To avoid the risk of damaging network devices, it is never advised to inject the PoE signal directly anywhere but the splitter, unless you are absolutely sure about the device’s characteristics and about what you are doing. The injector and splitter should be always used together.

According with the application, voltage drops should be considered. For most uses, specially for low wattages, voltage drops in a PoE cable are ignored, however, for longer distances they start having considerable values which can change the performance of the network devices. If the voltage drop is relevant, then you should consider increasing the voltage supply in order to compensate the drops through the cable and have the device’s nominal voltage in its terminals. In our case, the router is less than 5 meters way from the switch, so the voltage drop is irrelevant. For longer distances they should be calculated and considered. Maximum voltage used in PoE systems is 57VDC.

If you are not sure about the network, about the devices, about how they work or about what you are doing, then it’s advised not to do any changes, under the risk of damaging the network devices, and we are not responsible for any kind of damage. Whatever you do, do it at your own risk.